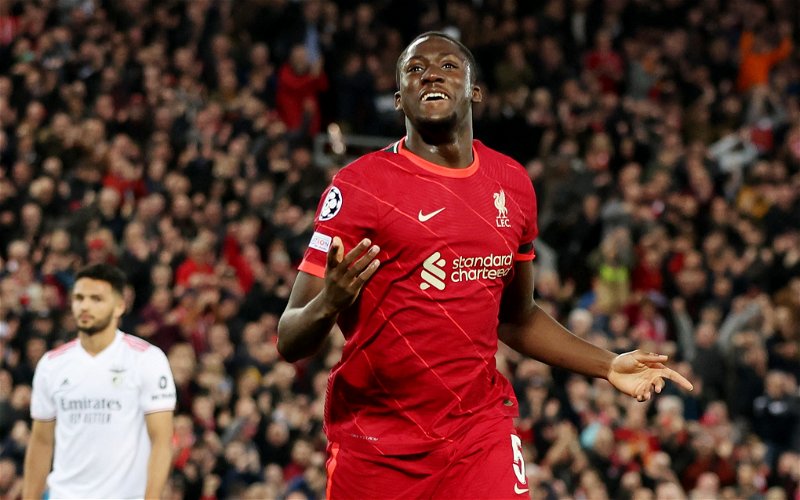 Liverpool legend Phil Thompson has claimed that he thinks Ibrahima Konate has recently been looking like an “absolute dream” on the pitch.

The Lowdown: Another top performance

The 22-year-old stole the headlines once again on Wednesday night as he scored the Reds’ opening goal in the Champions League clash against Benfica, as they booked themselves a place in the semi-final alongside Villareal.

The Frenchman hasn’t typically been a first-choice centre-back under Jurgen Klopp in the league this season, but has showcased his talent when given the opportunity in other cup competitions and midweek matches, and the former Anfield defender has certainly been a fan of what he’s seen in recent games.

Speaking on the latest episode of the Off The Ball podcast, former Sky Sports pundit Thompson said:

“He is a wonderful player, so there are no problems making these changes.”

With Virgil Van Dijk and Joel Matip both now at 30 years of age, the hierarchy will want to start building the long-term future of the club, and the £27m-rated talented prospect could be the perfect replacement for when the time comes that the current centre-back partnership hang up their boots.

The 13-time international has made 21 appearances for Liverpool so far this season and has found the back of the net on two occasions, with both of those goals coming against Benfica in the Champions League, as per Transfermarkt. This has now drawn him level with Harry Kane and Neymar, who have also recorded two goals in the knockout stages of the European tournament over the last five years.

Konate is currently averaging an 85.6% pass success percentage rate across all competitions, showing that he can remain calm when playing out from the back, and also wins three aerial duels per 90 minutes, via WhoScored, displaying his strength to win battles in the air.

The £71k-per-week star will still have many of his prime years ahead of him, and despite Van Dijk being expected to come back into the starting XI for this weekend’s FA Cup clash against Manchester City, it will be interesting to see whether the Paris-born man can keep his place after yet another impressive display.

In other news, Liverpool have recently been linked with a move for a Croatian star. Read more here.