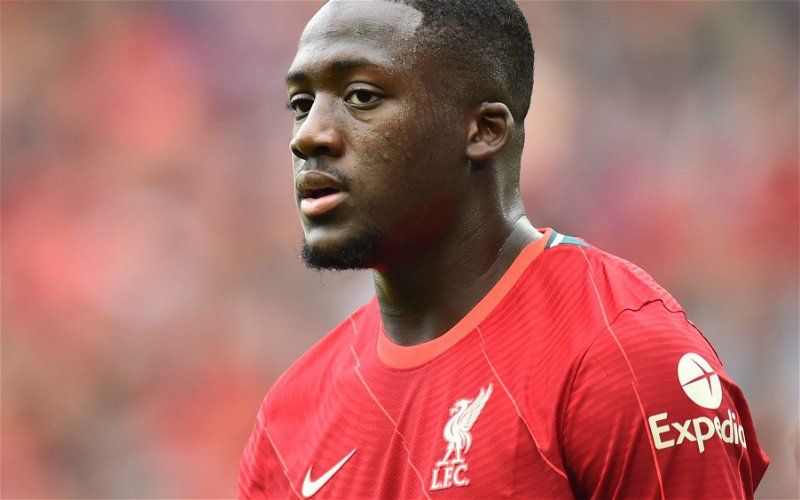 The 22-year-old, who first arrived on Merseyside from RB Leipzig last summer, put the Reds ahead in the Champions League clash at Anfield, before a double from Roberto Firmino sealed their place in the semi-final, where they will now face Villareal.

Despite Jurgen Klopp naming a heavily rotated starting XI from the side that took on Manchester City last weekend, it was the centre-back who yet again caught the eye, specifically that of the ex-Liverpool man.

The Verdict: Deserves a chance

Even though the Frenchman hasn’t typically been the Merseyside club’s first-choice partner alongside Virgil Van Dijk this season, thanks to Joel Matip, he’s clearly not short on confidence following his display against the Lisbon-based outfit and deserves to be given an opportunity to prove himself.

The £71k-per-week ace has made 21 appearances for the Reds so far this season, with five of those coming in the Champions League. In those European outings, Konate has scored two goals and has a pass success percentage rate of 88.5%, not to mention the fact that he is winning 2.8 of his aerial duels per 90 minutes, via WhoScored, showing that he can be effective at both ends of the pitch.

Meanwhile, he was a regular presence on the ball, registering more touches (111) than any other player on the pitch.

Speaking during an interview on CBS Sports (via Sportskeeda), pundit and Liverpool legend Jamie Carragher was also really impressed by what he saw.

“Konate scored exactly the same goal from the first leg. Nicolas Otamendi in the back of the net, as always.

“Brilliant start from that lad and he been brilliant since he has come in really to the Liverpool team.”

As Klopp’s men continue to hunt down the unprecedented quadruple, they will need to put out their strongest 11 between now and the end of the season, and it’s performances like this that will make it even harder for the German manager to select his squad in games to come.

In other news, a former Premier League defender has made a bold claim over a Liverpool star. Read more here.