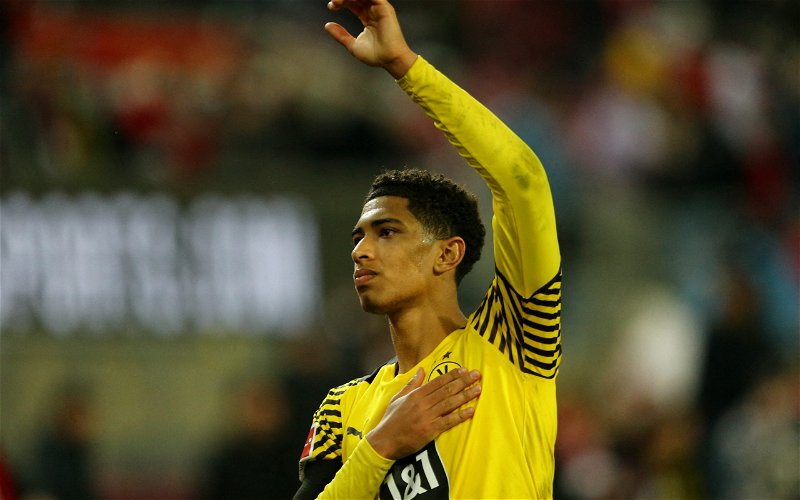 Clinton Morrison has tipped a top-level Premier League team like Liverpool to go on and sign Borussia Dortmund star Jude Bellingham in the near future.

The 18-year-old first joined the Bundesliga outfit from Birmingham City back in 2020 and has made a total of 27 goal contributions in 83 outings since that time, as per Transfermarkt.

Despite the youngster’s contract not set to expire until 2025, the Anfield outfit are said to be just one of the many clubs that have recently been linked with Bellingham, so it would be no surprise to see him follow in the footsteps of former teammate Jadon Sancho, who has already made the move back to the Premier League with Manchester United.

The Latest: A possible return

Speaking on BBC 5 Live Sport’s Wednesday Night Club, Morrison predicted that the midfielder would remain in Germany for another season, before making the transition back into English football. The former striker, who now does punditry for Sky Sports and the BBC, said:

“He’ll probably stay at Dortmund for another year, but I think a team like a Liverpool will come and get him sooner rather than later.

“I want to see him in the Premier League, because he’s going to be a superstar.”

Following some impressive performances for Marco Rose’s side this campaign, the £67.5m-rated starlet has earned himself an overall rating of 7.18, making him their third-highest ranked player below Erling Haaland and Marco Reus, via WhoScored.

Should he decide to make the switch to Merseyside, Bellingham has the potential to be the next Jordan Henderson, with the Reds’ captain hailing his fellow Englishman as a “special talent”.

England manager Gareth Southgate has also hinted that he thinks the 12-time international would benefit from returning home and joining a Premier League club. He said:

“The league is definitely a brilliant league for young players and coaches to develop but of course the standard of the Premier League is undoubtedly higher, I think we see that in the European competitions.

Now 31 years of age, Henderson probably won’t have many more seasons left with Liverpool and so it would be beneficial for the hierarchy to start looking at possible long-term successors and that could well just be his midfield sidekick.

In other news, Liverpool are reportedly monitoring a 22-year-old winger. Find out who here.