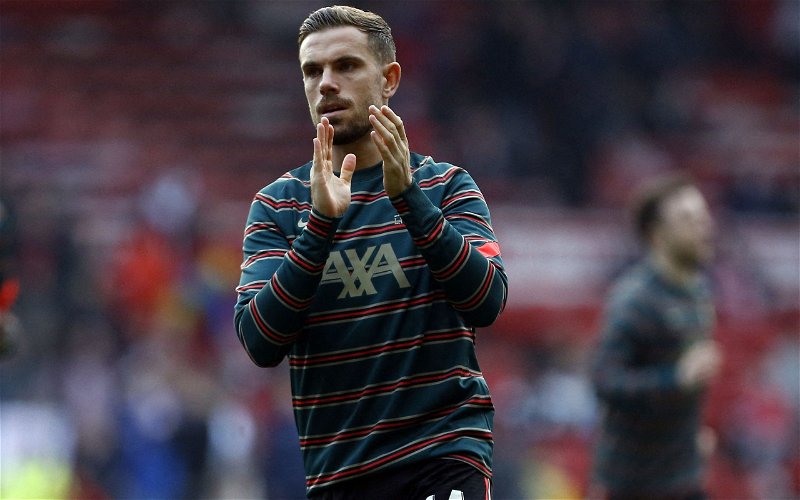 The Lowdown: A key player

The Reds captain has so far made a total of 436 appearances for the Anfield outfit, and in that time, has played an integral part in Jurgen Klopp’s success after getting his hands on both the Premier League and Champions League trophies.

However, despite not wanting to sanction Henderson’s exit, the ex-professional believes that the £16.2m-rated talisman is no longer able to influence games in the same way as he previously could.

Speaking on the Off The Ball podcast, Cunningham said:

“Now over the past year, I’m just looking at Jordan Henderson and just feeling as if there is a drop off now of his performance levels.

“Now what does that mean for the team?

“He certainly stays at the football club, such is his importance in the dressing room in terms of his influence around the team, you don’t get rid of that too easy.

“I just get that feeling, over the last six months, that he may not be able to influence games as he has done previously, just due to the deterioration in his physical condition.

“It happens to us all at some point.”

The Verdict: A superb servant

The £140k-per-week star has been a fantastic servant for Liverpool, but with Henderson being 31 years of age, now is probably the time for the hierarchy to start looking for a long-term replacement ready for when the day comes that he hangs up his boots for the final time.

The midfielder has been a rock in the middle of the park this season, averaging 1.2 key passes and 2.8 long balls per game, alongside having a pass success percentage rate of 84.6%, as per WhoScored, showing that he has the ability to control a match and remain calm in possession, which has been one of the key factors in why the Reds have been so successful and now find themselves pushing for the title once again.

Once described as being a “perfect role model” by his manager Jurgen Klopp, it’s obvious to see that everyone at the club thinks highly of Henderson and there’s no doubt that whenever he does reach the end of his career, he will go down in the history books as a Liverpool legend.

In other news, Fabrizio Romano has dropped a huge update on Mo Salah’s future at the club. Read more here.