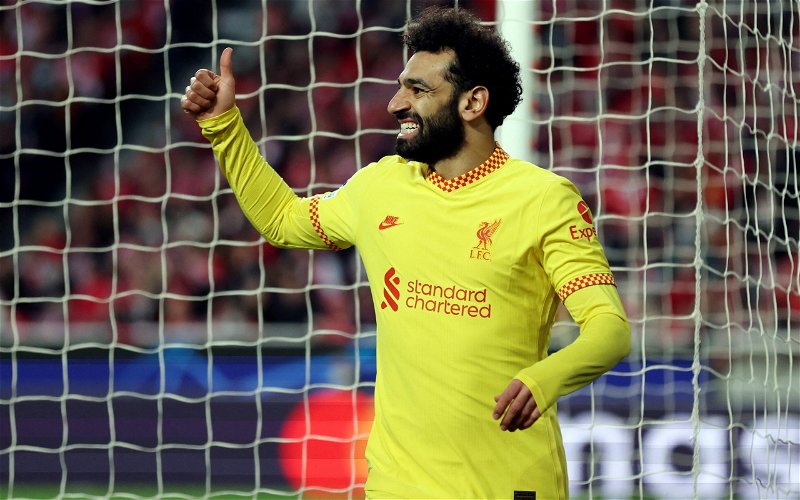 BBC Radio 5 Live pundit Ray Parlour has stated that he believes Mohamed Salah will be able to end his goal drought ahead of Liverpool’s crunch clash against Manchester City at the weekend.

The Anfield outfit take on Pep Guardiola’s side at the Etihad on Sunday afternoon in what could be a decisive game in terms of who lifts the Premier League trophy at the end of the season.

The 29-year-old starred in the Reds’ 3-1 victory over Benfica earlier this week, but it was a frustrating night for the Egyptian who missed multiple chances in front of goal that he would normally be putting away.

However, the Arsenal legend says that Salah could return to form at the perfect time in a bid to boost the club’s hopes of winning the title race. Speaking to talkSPORT Breakfast this week, he said:

“Every player has a little bit of a dip during their season, it’s about how quickly you come out of that dip.

“I wouldn’t be worrying about Salah whatsoever. On Sunday [against Man City] he could score two goals like that and suddenly Liverpool could win the game.

“I think Klopp knows how good he is and how important he is for Liverpool. He might have a quiet word with him, saying ‘keep going, you’re going to get your goal soon’ and just get that little bit of confidence and belief in him again.”

As Parlour stated, every footballer is bound to have a little poor run of form at some point during a campaign and it seems like that time is now for Salah, probably more so after suffering the disappointment of Egypt failing to qualify for the World Cup at the hands of teammate Sadio Mane’s Senegal.

The 82-time international missed the final penalty that lost his country the game and since returning to Merseyside, Klopp has admitted that his recent failures have affected his performances.

Since his return from international duty, Salah has struggled to last 90 minutes or provide a single goal or assist in games against Watford and Benfica.

However, there’s no forgetting that the forward has already made an outstanding 30 goal contributions for the Reds in just 28 top-flight appearances so far this season, so there’s absolutely no doubt that he will return to his prolific self sooner rather than later.

In other news, see which Liverpool youngster we feel could be a future first team star in the making by clicking here.