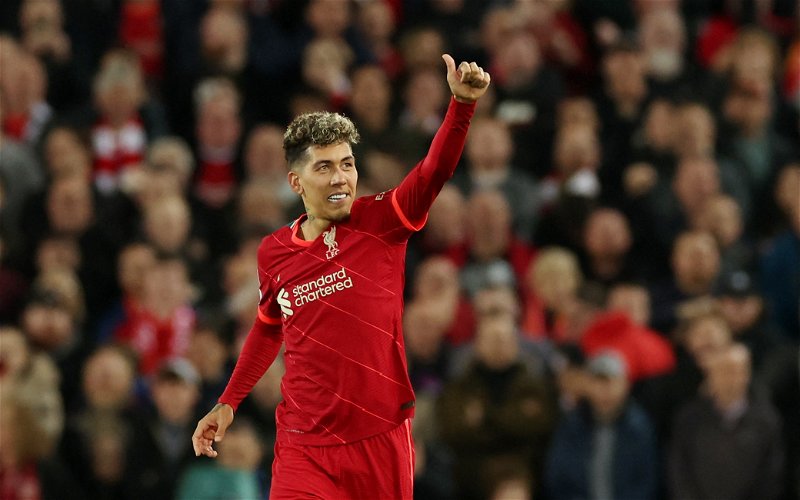 Jurgen Klopp has delivered an update on the fitness of Roberto Firmino ahead of Liverpool’s upcoming Premier League clash against Everton on Sunday afternoon.

The Brazilian was forced to miss out on the Reds’ 4-0 victory over Manchester United in midweek as a result of picking up a minor foot injury in the closing stages of the Emirates FA Cup semi-final.

However, the German boss has since admitted that he’s hopeful that the 30-year-old will be able to come back into contention to face the Toffees this weekend.

Offering an update on the situation to Sky Sports (via Liverpool’s official club website), the manager said:

“Bobby was not involved because in the very last situation of the City game he got something on his foot. It’s not really bad.

“Actually, we were a bit worried but the scan was fine. But it’s still very painful and that’s why there was no chance [against Man United].”

When asked whether Firmino would be available for the Everton match, he replied “We hope so.”

If the forward is declared fit in time to play Frank Lampard’s side, then this would be a huge advantage for the Anfield outfit, who will need to have all of their best attacking options available to them ahead of the final run-in.

Despite only making 18 Premier League appearances this season, the £34.2m-rated striker has still made eight goal contributions in that time, and has also been in impressive form in the Champions League, finding the back of the net five times in just six outings under the European lights, as per Transfermarkt.

Even though the likes of Diogo Jota and Luis Diaz sometimes get chosen ahead of him, it’s evident just how important Firmino is to Klopp, who has been full of admiration for his number nine. He said:

“Bobby is a complete footballer.

“A football team is like an orchestra, you have different people for different instruments. Some of them are louder than others but they are all important for the rhythm. Bobby plays something like 12 instruments in our orchestra.

Liverpool currently find themselves sitting in second place in the table, as it stands one point below league leaders Manchester City, and if the potential return of the 55-time international gets the Merseysiders firing on all cylinders, then the 2021/22 title race could be going right down to the wire.

In other news, a former goalkeeper has recently praised a £90m-rated Liverpool star. Read more here.