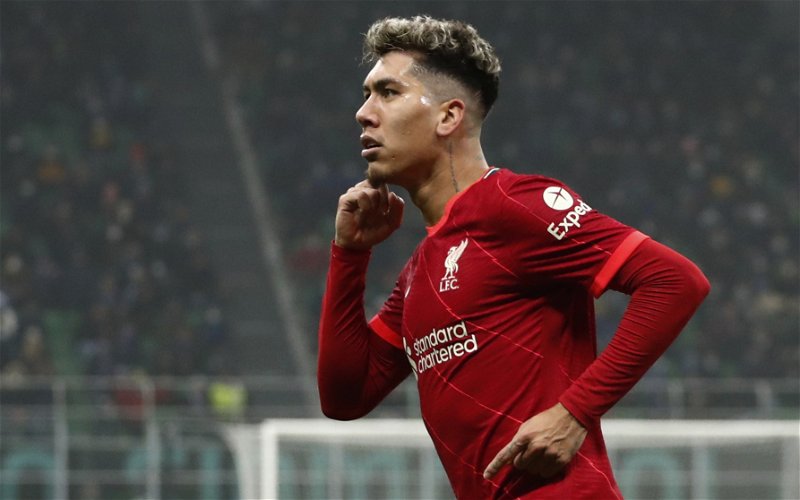 Liverpool striker Roberto Firmino looks set to be offered a new deal at the club, according to journalist Theo Squires.

The Brazilian first arrived at Anfield from Hoffenheim back in 2015, and since then has gone on to play an integral part in leading the line for that famous Reds front three under Jurgen Klopp.

The 30-year-old’s current contract with the Merseyside outfit is set to expire next summer, meaning that a decision will soon have to be made over where his future lies, and it seems that the Liverpool Echo correspondent thinks it’s only a matter of time before the hierarchy make up their minds.

When hosting a Q&A session for the Liverpool Echo, the journalist was asked whether he thought Firmino would be presented with a contract extension alongside his teammates Mohamed Salah and Sadio Mane, and this was his response:

“It’s an interesting one with Firmino.

“For so long he was Liverpool’s go-to man and rarely injured but they have evolved beyond him this season.

“I agree, I struggle to see Liverpool keeping all three forwards beyond next summer but never say never.

“Mane has obviously done his own hopes of a new deal no harm, with his agent recently saying talks were on hold until the summer. Plenty has been written about Salah with no breakthrough yet.

“I’d imagine the club will see what happens with Salah and Mane and then decide what to do with Firmino.

“They’ll make an offer they consider fair at some point and will just expect him to want to stay, then it’s up to the Brazilian if it’s right for him or time to move on.”

Despite the forward not making as many appearances as he probably would have liked this season as a result of being out with multiple injuries on occasion, the 55-time international has still done more than enough to earn himself a new deal.

The £34.2m-rated talisman has made a staggering 171 goal contributions in all competitions during his time with the Reds and is an underrated player, with his ability having always been compared to his attacking counterparts.

Firmino, who was once described as being “unbelievably valuable” by his German boss, has received high praise from fellow Liverpool star Mane, who has stated that his Premier League record would not be anywhere near where it is if it wasn’t for his £180k-per-week partner.

“He deserves more credit than me and Mo, for sure. But it is part of football, (people) always seeing the goals scored.

“But without Bobby, I don’t see me and Mo score as many goals as we have, to be honest. He makes everything easier for us.”

The Reds’ number nine has recently dropped down the pecking order when it comes to the starting XI, with the likes of Diogo Jota and Luis Diaz being chosen ahead of him, but even if the former Bundesliga man was to only play more of a part-time role between now and the end of the campaign, he still has the potential to contribute and help his team try and achieve that unprecedented quadruple.

In other news, a Sky Sports pundit has heaped praise onto a new Liverpool fan favourite. Read more here.