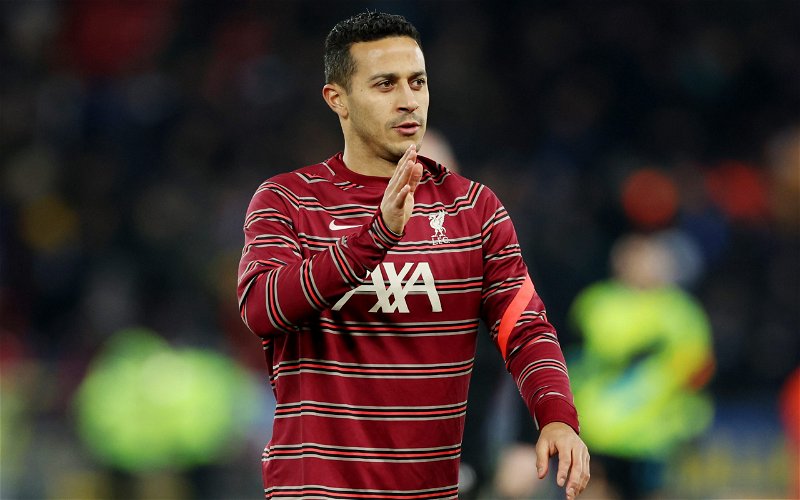 BBC pundit Gary Lineker has claimed that he thinks Thiago Alcantara is a “superb player” following his performance against Manchester United.

The Lowdown: Top of the table

The Reds secured a staggering 4-0 victory against Ralf Rangnick’s side at Anfield on Tuesday night, with goals coming from Diaz, Mane, and a brace for Mohamed Salah, who returned to his prolific self after a recent poor run of form.

This result now sees the Merseyside outfit go two points clear at the top of the Premier League table, with their challengers Manchester City still to play their game in hand against Brighton on Wednesday evening.

One Liverpool player who stood out from the rest though was the 31-year-old midfield maestro, and it seems that his impressive display caught the eye of the Match Of The Day host.

The Verdict: Best performance in a Reds shirt?

Ever since joining Jurgen Klopp’s squad from Bayern Munich back in 2020, this might have been the Spaniard’s best outing in a Reds shirt to date.

The £19.8m-rated talisman had a huge influence on the match against United, completing three key passes and three successful dribbles, more than any other Liverpool player on the night.

Not only was Thiago a threat going forward, but he also put in a great shift defensively, making a total of three tackles, again higher than any of his fellow teammates, two interceptions, and one clearance and blocked shot.

The 46-time international additionally recorded a pass accuracy rate of 95.6%, which was more than any of the original starting XI, earning himself an overall rating of 8.17, as per WhoScored.

Former Liverpool striker Michael Owen was full of praise for the £225k-per-week star, writing on his social media:

Thiago has proven just how much of an impact he can have on this side, and with just six games of the season left to go, he could be the difference in the middle of the park that might decide whether the Reds will get their hands on the coveted Premier League trophy and win that all-important title race come the end of May.

In other news, a journalist has dropped a huge update on a Liverpool transfer target. Read more here.