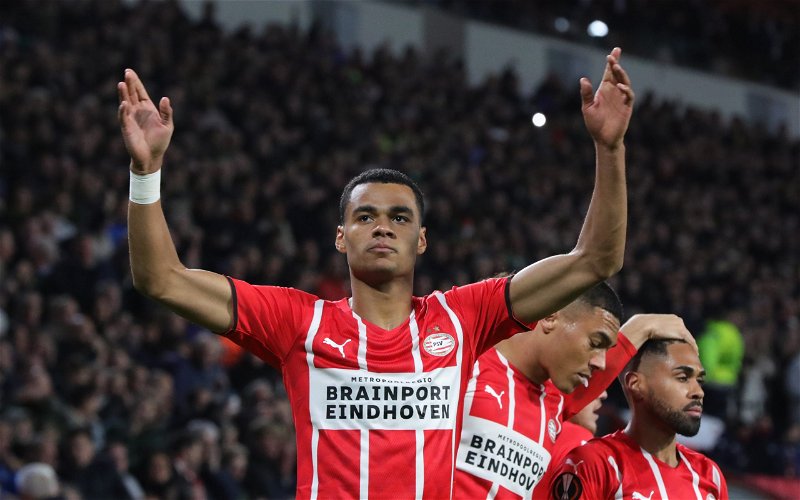 According to journalist Marco Timmer of Voetbal International, the 22-year-old is set to depart the Eredivisie club this summer. He said:

‘’It is now a certainty that Cody Gakpo will leave PSV.

‘’(Gakpo) has already spoken to clubs such as Liverpool and Manchester City, while Bayern Munich are also interested.’’

A naturally left-sided winger, the four-time international has netted the exact same amount of goals for both club and country as Sadio Mane (17), but has managed to register 11 more assists than the Senegalese sensation to date.

Gakpo currently has an overall rating of 7.58 for his performances so far this season and has become an integral part of the PSV team, completing three key passes, shots and dribbles per game.

These impressive displays have seen him earn high praise from the likes of former Netherlands international Theo Janssen, who claimed that the £7.4k-per-week star “has everything.”

Valued at £22.5m by Transfermarkt, Gakpo could prove to be a brilliant signing for manager Jurgen Klopp, with his contribution in the attacking areas of the pitch having the potential to make him a future key figure in the Anfield outfit’s side.

Whilst Mane, 29, still has plenty left in the locker, it wouldn’t harm the squad to plan ahead for the long-term by signing Gakpo in the summer.

He’d be something of a dream option given his impressive tally this campaign.

In other news, Liverpool have reportedly made an approach for a Premier League winger. Find out who it is here.