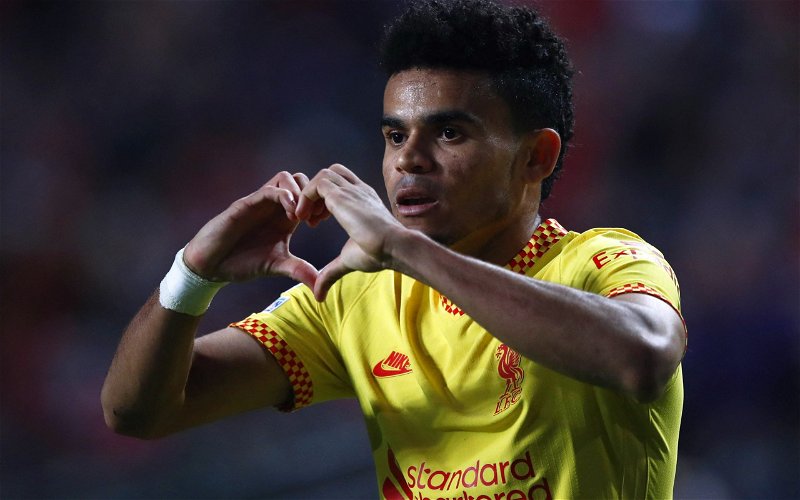 Liverpool continued their excellent run of form on Tuesday night as they secured a 3-1 Champions League quarter-final victory against Benfica in Lisbon.

Ibrahima Konate opened the scoring for the Reds, netting his first goal since arriving at the club, before the Reds doubled their lead through Sadio Mane right on half-time.

Darwin Nunez pulled one back for the home side, before Luis Diaz sealed the win for his team by adding a third in the closing stages of the game.

Despite a strong performance all around by the Anfield outfit, it was indeed the Colombian who yet again proved to be the bright spark in helping Jurgen Klopp’s men gain a two-goal advantage going into the second leg.

The 25-year-old has already made a total of four goal contributions in just 13 outings for Liverpool so far this season, as per Transfermarkt, and it’s obvious to see why the hierarchy signed him, given his impressive display on his return to Portugal.

Not only did the £40.5m-rated talisman register an assist on the night, but he also managed to get on the scoresheet himself and was described as being “on a different level” by former Premier League star Jason Cundy after the game.

According to WhoScored, the forward had a 92% pass accuracy, making him the third-highest ranked Reds player on the night (underneath Virgil Van Dijk and Naby Keita) and as a result, earned himself an overall match rating of 8.61, higher than any of his fellow teammates.

Diaz additionally recorded four shots during the game, putting him joint-top alongside Keita, which saw him pick up the ‘Man of the Match’ award for his brilliant performance, via Sky Sports.

The former Porto man outshone his fellow winger Mo Salah, earning an 8.61 rating in comparison to the Egyptian’s 6.44, whilst he also registered a total of three successful dribbles and won seven duels too – he was everywhere.

Speaking during his post-match interview, Klopp hailed the 35-time international as being a “world-level” player, and should the German manager decide to start Diaz in the crunch clash against Manchester City on Sunday, his influence on the team could well be the difference between winning and losing the title.

In other news, a Sky Sports and BBC pundit has tipped Liverpool to go on to sign a £67.5m-rated ace. Read more here.