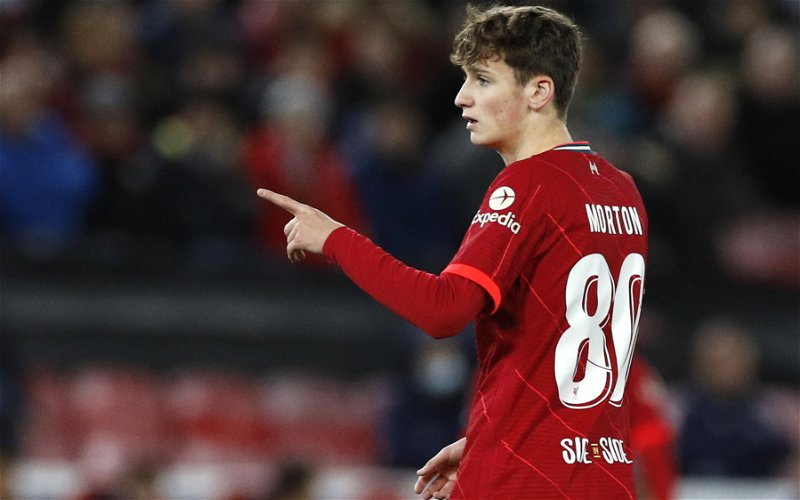 Liverpool fans will no doubt be excited at the thought of some of the club’s brightest young talents breaking their way through into the first team, and one of the players who has the potential to do just that is Tyler Morton.

The 19-year-old has been part of the academy set up with the Merseyside club since the age of seven and first made his debut for the U23s in the 2020/21 season, via Liverpool FC’s official website.

During that campaign, the midfielder scored five goals and provided three assists in just 14 appearances in Premier League 2, as per Transfermarkt, where he also played a hugely important role in helping his side reach the FA Youth Cup final.

After making his first-team debut for the Reds in the Carabao Cup fixture against Norwich City earlier this campaign, the youngster’s performance was described as “excellent” by Sky Sports pundit Andy Hinchcliffe, and this display proved to be the catalyst in earning himself another chance to impress Jurgen Klopp where he went on to make two Champions League outings, securing a pass success percentage rate of 83.7% and an overall match rating of 7.01 in those games, according to WhoScored.

Speaking during an exclusive interview with SPORTbible, Morton made it very clear that he wants a future with the Anfield outfit. He said:

“If you really want it, you have got to work hard and that’s what I’m doing.

“I’ll try and do that to the best of my ability and see where it takes me.”

The German boss previously admitted that the £2.7m-rated starlet made “all the difference” in Liverpool’s tie against the Canaries and said that his “confidence level exploded” overnight, when delivering a press conference to the media.

If Liverpool are continually looking to get more out of their academy, then Morton could well be the next breakout star to come out of the AXA Training Centre, following in the footsteps of Trent Alexander-Arnold and Curtis Jones.

In other news, a long-time Liverpool servant has been linked with a move away from the club this summer. Read more here.