Liverpool: Gabby Agbonlahor claims injured Thiago must not be “selfish” 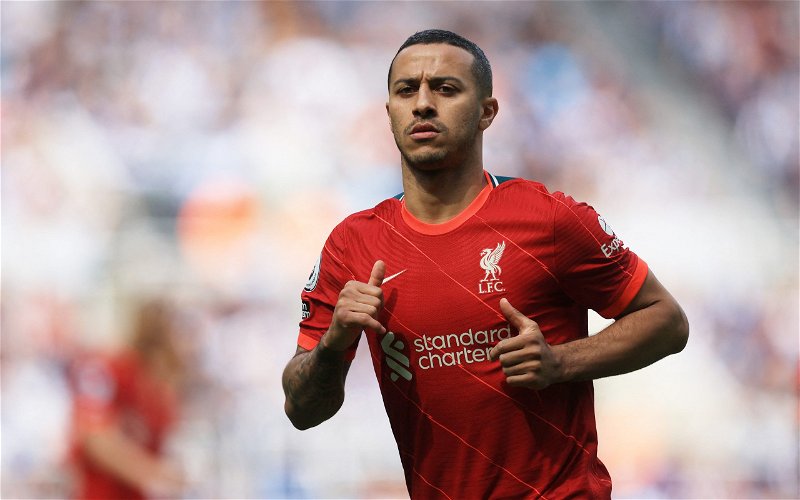 Former Premier League striker and talkSPORT pundit Gabby Agbonlahor has claimed that Liverpool’s Thiago cannot be “selfish” when it comes to forcing himself back from injury for the Champions League final.

Thiago had to be withdrawn in Liverpool’s final match of the season early on, as Anfield bore witness to a 3-1 win over Wolves. Unfortunately for the Reds, a victory at the Etihad ensured the title remained in Manchester.

Liverpool have also been without Fabinho since his injury at Aston Villa earlier this month, and Jurgen Klopp will be sweating over what his midfield may shape up like in the wake of their Champions League final this Saturday against Real Madrid.

Talking to Football Insider, Agbonlahor says the Spanish international can’t afford to play if he is not fit, and potentially let his team down:

“You can say play through the pain but you can’t play when you are going to let the team down, you’ve got to be 100%.

“You can’t be selfish and play because you want to play in a Champions League final. I’m sure that Klopp will be checking all his players and making sure they are 100 per cent because Real Madrid are a good side.

“In that midfielder, [Eduardo] Camavinga might start after the way he played against Man City.

“It’s going to be a very tough game for Liverpool. Real Madrid have had a lot more rest.”

Just after the Wolves match, Klopp revealed about Thiago:

“I think he’ll be out of the final but I don’t know. He’s limping so its maybe not the best sign”. However, many speculate it will be a late decision on both him and his Brazilian teammate for their all-important showdown on Saturday.

Klopp will be wary to include a player who is not fully fit for their trip to Paris, but the importance of Thiago on Liverpool is enormous and might force him into the side even if he is only half-fit.

Our thoughts on Agbonlahor’s comments…

Thiago has been a revelation since he signed in 2020, despite having to wait for a sustained run in the team due to a bout of injuries. Since then, he boasts a 69.12% win rate over 68 games for the club.

The £19.8m-rated midfielder’s role within Liverpool does require lots of running however, and giving a team like Real Madrid a weak spot in midfield could be suicide if he cannot keep up with the speed of the game.

Agbonlahor does talk sense, and perhaps the Spaniard could be rested enough for a short cameo off the bench if he was really needed by Klopp.

Liverpool could be ready to tie down one of their big stars. Find out who here.