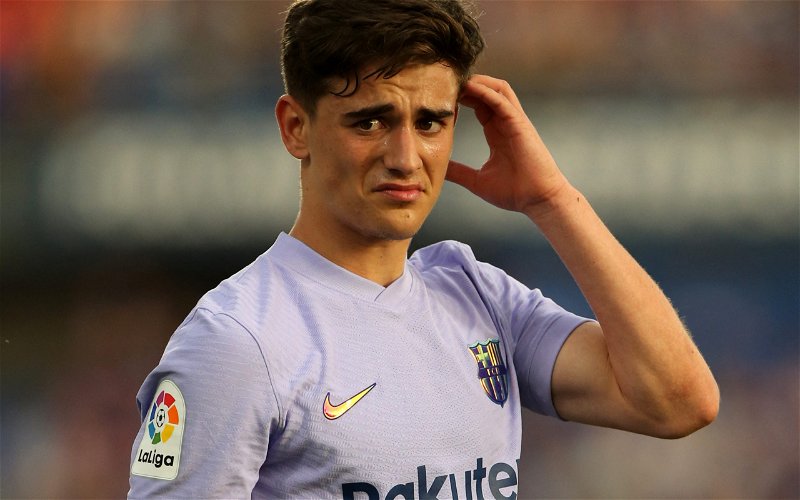 That’s according to Spanish publication Marca, who claim that Barcelona are scrambling to tie down the youngster to a new deal, in an attempt to ward off any potential suitors.

Both Liverpool and Manchester City have registered an interest, as the release clause initially sat at €50m (£43m).

However, due to a new clause in his contract, with the turn of June that has risen to €100m (£87m), which may cast doubts over any potential transfers.

At just 17 years old, Gavi really does have the world at his feet.

The teenage sensation has burst onto the scene as another fabulous product of Barcelona’s infamous La Masia academy and has shown maturity beyond his years to play consistently for both club and country.

Another product of this footballing school was Liverpool’s Thiago, who only recently turned 31. Despite the ever-growing price tag of the teenager, perhaps Jurgen Klopp will want to act as soon as possible to secure this constantly evolving maestro who is the perfect Thiago heir.

The 10-cap Spanish international has impressed this season, managing 34 league appearances and contributing to eight goals throughout. If the Reds were to sign him, instantly this would be a slight improvement on Thiago’s five goal contributions.

However, what is more important for Liverpool is how the 31-year-old dictates the play. He sits just in front of Fabinho, keeping the team ticking with his intricate passing.

Gavi’s underlying stats prove that he too could do this job, with a bit of added dynamism that youth can bring. He ranks in the 94th percentile for dribbles completed and boasts 3.58 touches in the opponent’s penalty area, 6.73 progressive carries per 90, and a pass completion rate of 87.7%.

These numbers tell the tale of a player desperate to progress the play, and he would be a fan favourite at Anfield with this kind of offensive outlook on the game.

Unsurprisingly, Thiago has better technical skills and therefore his stats reflect this. He sits in the 99th percentile for progressive passes per 90.

If Gavi continues to gain experience in the way he currently is, it will not take long for him to acquire the necessary skills to emulate the Reds’ magician.

The manager of one of the club’s so interested in signing him, Pep Guardiola, outlined him as another glowing recommendation of the academy that he too came through.

“He is fantastic,” he started. “It shows there is a lot of future and very good work in the youth system there,” he claimed, whilst teammate and fellow La Masia graduate Pedri once lauded the midfielder as “absolutely crazy.”

If Liverpool can tempt the £54m-rated man, no matter the price, it would represent a major coup because he will be around for a seriously long time.

He can perfectly replace Thiago one day, a player that at Anfield would’ve been deemed irreplaceable not so long ago.

In other news, Liverpool swooping for “excellent” 38 G/A machine could spell Firmino’s end at Anfield.