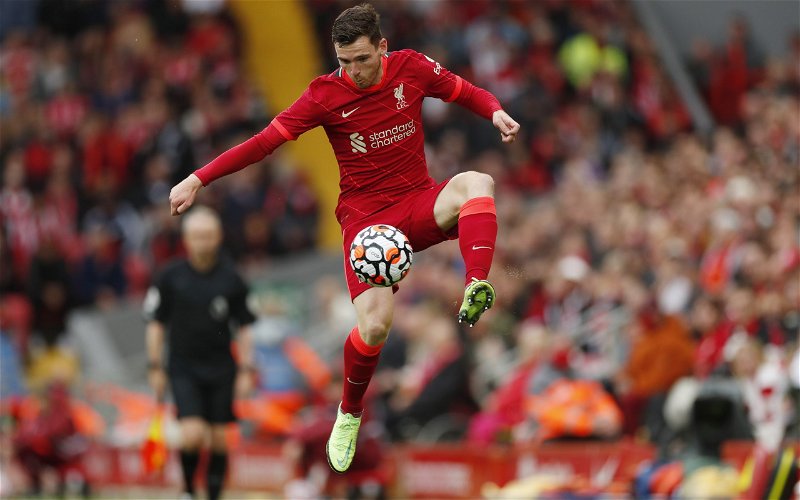 Liverpool’s style of play relies heavily on the offensive fullbacks who many deem to be the best two in the world. The Reds were so close to securing an unprecedented quadruple last season, with these two integral to their run and the way they play.

Jurgen Klopp has crafted a side perfect for his style of football, with intense pressing and a lethal touch going forward.

Someone who perfectly embodies everything about this is Andy Robertson, who has terrorised defences with his pinpoint crosses and marauding runs down the left flank.

Signing from Hull City following their relegation in 2017, the Scottish international cost Klopp just £8m initially. In his debut season on Anfield, he recorded a modest five assists in the league.

However, in the season following, a fine 11 assists saw Liverpool cruise to their sixth European Cup. He has hit over 10 assists in three of the last four seasons.

Not only this, but his fine defensive work is also worth noting. He averages 10.14 pressures per 90, and upon winning the ball back, ranks in the 97th percentile for progressive passes per 90.

It is this kind of consistency that led Kevin Phillips to make the claim that “he’s the best in the world” in his position.

He went on to label him “a top, top player.”

“Players like him don’t lay down, they come back stronger from injuries and after criticism. His attitude is superb.

“He might well be the best left-back in world football at the moment. He’s fantastic. He gives Liverpool everything down that side, from assists to crucial tackles.”

Meanwhile, Klopp himself has said:

“Andy Robertson has been so consistent for us and is without doubt a leader in our dressing room. The public often sees the ‘fun’ Robbo when he’s doing media appearances or is caught on camera with his teammates. But that persona sometimes hides his other qualities.

“Incredibly brave, incredibly smart and someone who is very serious about his work. You don’t become one of the best players in the world in your position without being the complete package.”

As mentioned earlier, he was signed for just £8m, and at the time rated at just under that, at £6.3m.

However, since joining Liverpool his value has seen an astronomical rise, reaching its pinnacle in December of 2019 when he became worth £72m. Since then, he has cooled off and settled at a modest £58.5m.

The growth from when he first signed to his highest value at Liverpool represents an astonishing increase of 1043%, which has now gone down to 631%.

This rapid rise over just two years speaks volumes about his mindset, and the manager’s ability to build a team worthy of such high-quality players.

Robertson is the perfect Klopp player, and in turn, he has created the perfect system for the 28-year-old. The two are symbiotic, and their part in Liverpool’s resurgence is nothing short of sensational.

In other news, Klopp could replace Liverpool’s wantaway “machine” with “complete” £49.5m-rated enigma.