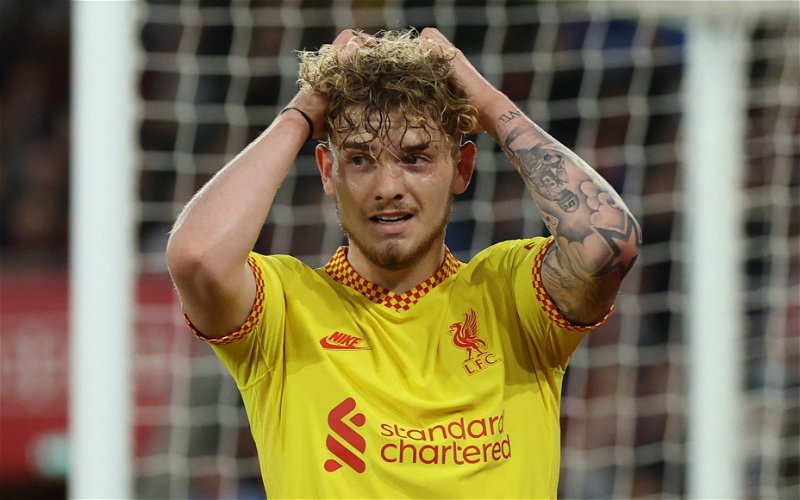 Liverpool came within just a few wins away from true glory last season.

Winning both domestic cups, the Reds were pipped to the title by just one point and were beaten by Real Madrid in the Champions League final.

Integral to the success found last campaign was Liverpool’s reportedly outbound winger Sadio Mane, who gave 20 goal contributions in the league alongside a further six in Liverpool’s Champions League run.

With the Senegalese forward now looking to exit Anfield, it appears that an opportunity is becoming available for anyone at Liverpool who feels they can replace the 30-year-old.

One player who possesses all the arrogance and ability necessary to fill the boots of a player widely regarded as one of the world’s best in his position is teenager Harvey Elliot.

The 19-year-old has impressed since he signed for Liverpool in 2019, quickly working his way into Jurgen Klopp’s plans. He started last season particularly strongly, featuring in all of the Reds’ opening four fixtures.

However, against Leeds, Elliot suffered an unfortunate fracture-dislocation of the ankle which saw him sidelined for the majority of the rest of the season.

His return was a triumphant one, however, as the £19.8m-rated ace scored the third goal as Liverpool beat Cardiff on their run to winning the FA Cup. His goal prompted Gary Lineker to dub him a “very exciting young talent”, as he delighted in seeing the youngster bounce back from his injury with a goal.

Klopp too was delighted to see him return, and clearly has high hopes for the versatile midfielder who earned praise for his performances on the wing for Blackburn.

Klopp said: “I know what an incredible talent he is and an incredible kid he is. When we lost him at Leeds, it was one of the hardest moments of my career”.

In the 2020/21 season, Elliot managed an impressive 41 league games and recorded 18 goal contributions whilst on loan at Blackburn. At the tender age of 18, Elliot proved that he has a huge future in the game and could certainly battle well in senior football. He has only improved since then.

A few more years under Klopp, playing with some of the best players in the world and competing for every major honour season after season, it is clear that Elliot has a glittering future in the game.

The potential exit of Mane could be just the chance he needs to get a proper run in the side and join the elite attacking players that enter into Klopp’s rotation cycle.

In other news, Klopp must now seal Liverpool swoop for £49.5m-rated “monster”, he could usurp Firmino.