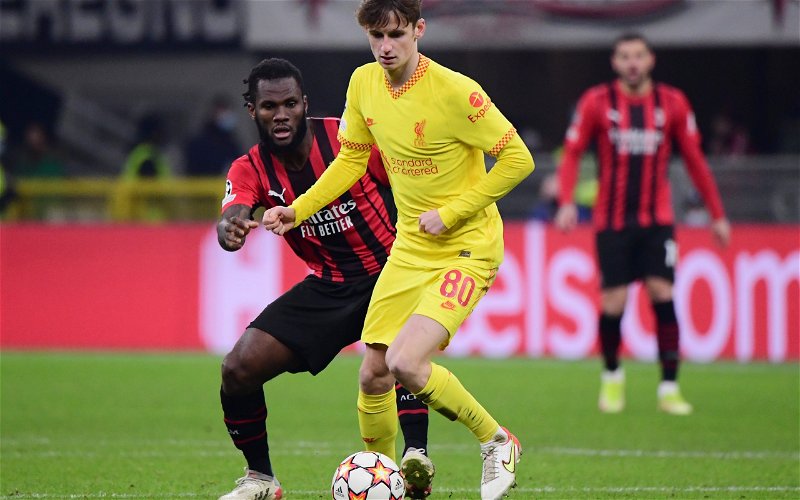 Following a successful yet somehow disappointing campaign for Liverpool, Julian Ward will now look to the transfer market to not only plug the gaps of any outgoing players but bolster the squad to allow the Reds to challenge further for an unprecedented quadruple. With Sadio Mane already looking to exit Anfield, the forward line will be where Klopp will aim to ensure stays at the same level of last season.

With attack the likely the priority, plans towards revitalising an ageing midfield may be thrown to the wayside for this season.

With Thiago and Henderson both at 31, with the latter’s starting position particularly at risk due to his dynamic play style, perhaps Liverpool have had the perfect replacement for the £16.2m-rated midfielder in their ranks all along.

Tyler Morton is a teenager who recently signed a long-term contract with the club in 2021. He is described as an “all-action midfielder” by Liverpool’s website, but Jurgen Klopp has commented on the 19-year-old’Klopp already has the perfect Henderson heir at Liverpool in “outstanding” 19 y/o gem – opinions “outstanding” football brain.

Having made nine appearances for the first team, including an appearance in Liverpool’s Champions League win over AC Milan in the San Siro, Morton is slowly building up experience playing and training alongside some of the game’s best players.

Turning 32 this month, Henderson appears to be coming to the end of his illustrious career. Another midfielder who relies on his all-action philosophy, he too has heaped praise on the player that could be poised to replace him.

Speaking to LiverpoolFC.com, he suggested that the £2.7m-rated man had “a big future ahead of him”. However, that future could come sooner than expected due to Liverpool’s transfer priorities.

Having already secured the signing of Fabio Carvalho, and been linked with many attackers to replace the reportedly outgoing Sadio Mane, it appears that with a strong push Morton could force himself into Klopp’s thought process for an ageing midfield that he seems to have fewer plans to bolster.

Morton’s underlying statistics for the Reds in the Premier League are impressive given his minimal playing time, as he averages 17.1 pressures per 90 and an 86.5% pass completion rate.

He also managed five goal contributions this season in the Premier League 2, further showing how he has the ability to contribute further up the field at times, similar to Henderson.

Perhaps next season could be Morton’s true breakout year, where can force himself into the lineup and look to fill one of a few spots that will be vacated in the coming years, given Henderson and Thiago’s age.

In other news, Liverpool are reportedly interested in a player who could be their new Mane. Find out who here.