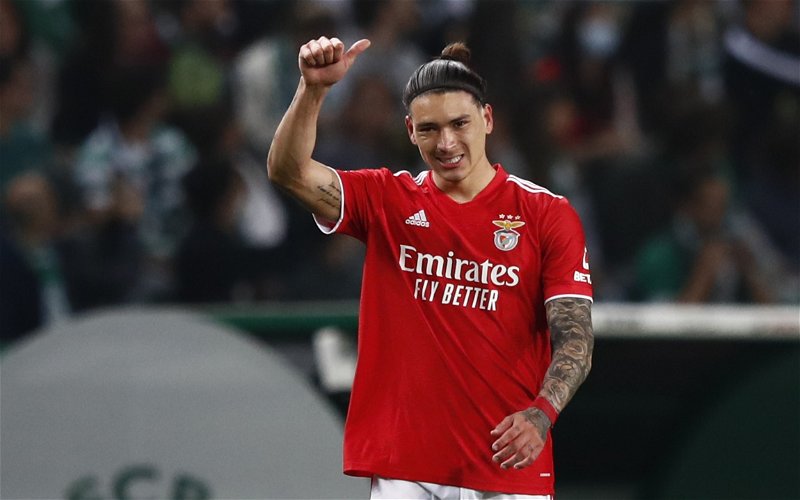 Ever since Jurgen Klopp first joined Liverpool way back in 2015, he has never really operated with a classic number nine.

Christian Benteke filled in for a small while, but it did not take long for the German to move him on and allow Roberto Firmino to assume the role.

His system relied on the Brazilian for many years to come, with the wingers taking on more of a goalscoring burden, allowing Firmino to flourish as a false nine.

Although playtime has lessened over the last season for the 30-year-old, still Klopp has opted for a more fluid front three in which anyone who plays across it can deputise as the central figure.

However, with the imminent signing of Benfica’s Darwin Nunez, who is a more traditional striker, it begs the question of whether Klopp has a tactical tweak in mind to outgun Manchester City next season.

Nunez, amongst other things, is most definitely a goal scorer. That is something which the Reds will always take amongst their ranks.

The Uruguay international boasts 34 goals in 41 appearances this season, on top of four assists, and if he can bring anything near this level of proficiency in front of goal to Anfield he is bound to succeed.

However, it is his other attributes that will be of interest to Klopp and his staff.

Dubbed an “excellent player” by his boss at Benfica, Nelson Verissimo expects huge “growth” from a player “with a lot of potential”.

Standing at 6 foot 1, his aerial prowess offers Liverpool a new dimension in attack. His intelligence in the box, where he tends to drift onto the full-back and create a mismatch at the back post, has often seen him cause problems for opposition defences.

He will thrive off deliveries from Trent Alexander-Arnold.

Not only this, but he still possesses that fluidity mentioned that will allow him to drop deep, play up front, or even come in off the left flank. His 5.42 progressive carries per 90 make him a danger driving with the ball at his feet.

Whilst Firmino was once a silky player needed to link the midfield to the attack, the evolution of Liverpool means that they no longer need that mediator.

They have acquired the quality in midfield through the likes of Fabinho and Thiago to complete this role, hence Jota’s increased involvement as a more classic striker last season.

With a blistering speed and bulky physicality, Nunez also offers another dimension to run off the last man. Essentially, defenders will not know how to deal with this complete forward, with the ability to do it all.

The 22-year-old will likely not possess the link-up that Firmino once did, but frankly, he doesn’t need to.

He has been signed for all the reasons mentioned and more, and with this big-money move, it could spell the death of the now 30-year-old Firmino’s Liverpool career, who has admittedly seen his role reduced significantly in recent years.

Klopp may tweak his system ever-so-slightly, for example, he could promote more floated balls to the back post for Nunez, however, it appears that this deal has been made with the intention to keep the general ideas at Liverpool the same.

This signing has added elements that the front three did not previously possess, and now the Reds can feel confident in another push an unprecedented quadruple next season.

In other news, Liverpool now closing in on £49.5m-rated “predator”, he could outgun Haaland.