Liverpool set to miss out on Frenkie de Jong 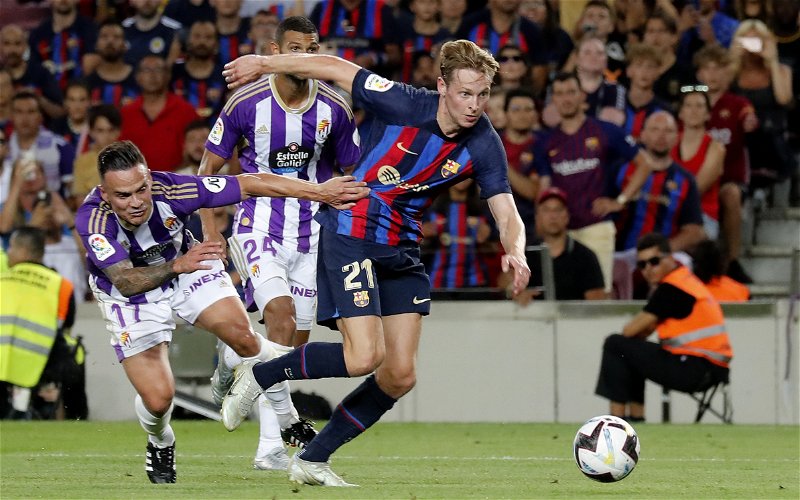 Liverpool are set to miss out on the signing of Barcelona midfielder Frenkie de Jong this summer.

That is according to reporter Ben Jacobs, via GIVEMESPORT, who claims that Jurgen Klopp’s side are not “actively pursuing” the Netherlands international at this moment in time, with the deadline now just a few days away.

“Talking to Barcelona sources, there doesn’t appear to be anything in this.

“And it is now being made clear by a lot of suitors that I’m speaking to, whether historical ones or active ones that have looked at De Jong, that he’s just not going to leave, which is in fairness to him, what he said or window.

“And we wait and see whether that is done before the window, whether that’s done after the window, but I think from Liverpool’s perspective, they’re not significantly, or at the moment, actively pursuing De Jong.

“Because they, like many, now know how difficult that is going to be with the expectation at the time of recording that De Jong will stay at Barcelona. So, it’s probably a non-starter that one.”

Amidst Liverpool’s midfield injury crisis, the signing of a progressive midfielder who can provide stability through ball distribution is needed.

With an average of 2.91 shot-creating actions, 5.49 passes into the final third and 5.08 progressive passes per 90, De Jong would have fit the bill nicely.

Whilst Manchester United have spent all summer being distracted by the 25-year-old’s situation at Barcelona, you get the gist that Liverpool’s representatives could have prised the former Ajax man away from Camp Nou even within the last few days of the window.

But it is not to be, with the Reds’ not actively pursuing the £164k-per-week “midfield maestro”, as dubbed by Statman Dave on Twitter.

It may come as a blow for fans who are desperate to see their side bolster the engine room with a world-class addition like de Jong, but it is worth noting that Klopp has other options with the likes of Youri Tielemans and Konrad Laimer just two cheaper and more versatile assets, with both in the final 12 months of their respective contracts.