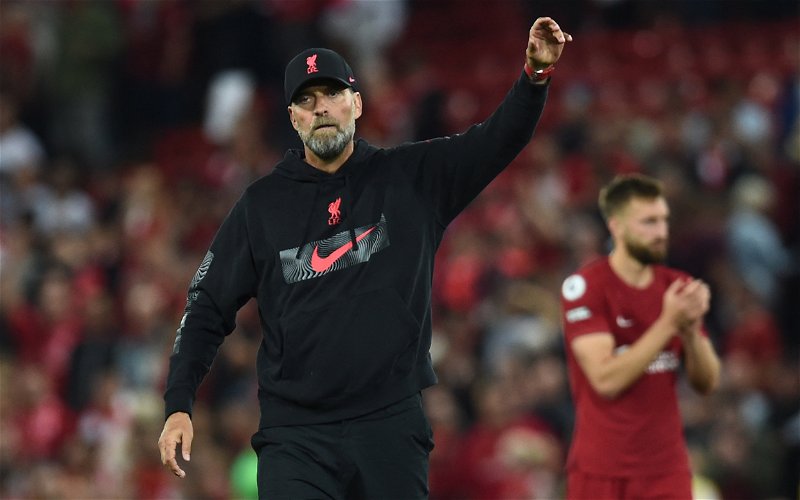 Liverpool manager Jurgen Klopp has conceded that his side may be forced back into the transfer market before the window slams shut on September 1st.

The 55-year-old was forced into changes due to injury and watched his injury-hit squad bring back yet another solitary point on Monday night in the 1-1 draw against Crystal Palace.

As per a report from the Express, Klopp has hinted at a transfer U-turn due to a lack of depth across the squad due to injury.

Focusing on the midfield, the likes of Thiago Alcantara, Alex Oxlade-Chamberlain and Curtis Jones are all sidelined with Klopp now forced into reconsidering Liverpool’s transfer strategy throughout this window.

As per the report, Klopp said:

“There are money reasons and contractual reasons which, most of the time, go hand-in-hand.

“It’s not that we deny signing a player if we have a problem with injuries, for example. But it is a complete different situation to the beginning of the pre-season when everybody told me we needed a new midfielder and that was about the kind of midfielder.

“Now the situation has changed slightly – we have more injuries, that’s true. But it can still only be about the right [player] and that is not easy. It is nothing to do with that it is now August already and at the end of August, the transfer window closes.

“It’s just because it is 2022 and people have contracts until 2024, 2025 or 2026. That’s the situation and that’s why we have to be calm and sort our problems with the boys we have. It’s all about solutions and only one of these solutions is the transfer market – all the other solutions are here.”

A change in circumstances

With the midfield and defence weakened, and now a suspension for Darwin Nunez to contend with, amidst his red card, the situation has dramatically worsened for Klopp so early into the season.

As such, it is no wonder that the club are considering delving back into the market for a further squad option.

Though, it is admirable that the club are still referencing their strategy in the market and, as Klopp states “it can still only be about the right [player].”

The update from the German boss suggests that they will look at options that fit the club’s ethos and will not make a move just for the sake of it – a philosophy that Manchester United will not even be able to comprehend at this point.

The likes of Matheus Nunes of Sporting CP, Marcelo Brozovic of Inter, and Enzo Le Fee of Lorient are just a few names who have been mentioned as midfield options.