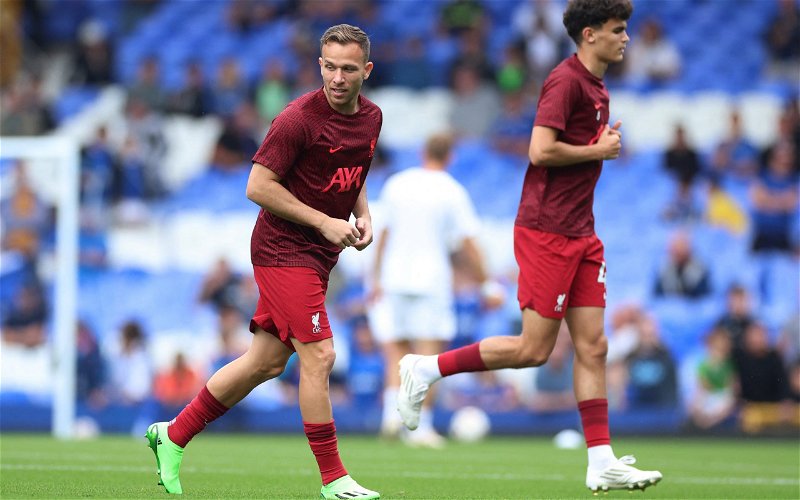 Having played in front of thousands for Barcelona and Juventus, beside esteemed company in Lionel Messi and Cristiano Ronaldo, it’s fair to say that Liverpool loanee Arthur Melo has kicked it with the best, in some of the most prolific venues, in the grandest competitions that football has to offer.

However, the 22-cap Brazil international found himself representing Liverpool under-21s in the Papa Johns Trophy at Rochdale’s Crown Oil area on Tuesday night, in front of a modest 1,060 supporters.

Whilst the rest of the Liverpool squad who are not on international duty are enjoying a week off, Arthur has dropped down to the Reds’ under-21 squad in an attempt to build up his fitness levels.

The game against Rochdale was his second for the Liverpool academy side, having played 90 minutes against Leicester City’s youth squad just last week.

This is part of a special plan devised by Jurgen Klopp and co, who want Arthur to get up to speed and be ready to compete for a place in the first team after the international break.

As per James Pearce of The Athletic, Liverpool under-21 boss Barry Lewtas was full of praise for the Brazil star, saying: “From what I’ve been told, Arthur asked to play,

“He wants to get fit, he doesn’t need a week off. It’s been off his own back, which shows his level of professionalism. He’s been great with the young lads. I don’t think he knew where we were coming tonight but he knew we had a game! In training yesterday he was excellent. He really drove the session. It was probably the best matchday minus-one we’ve had.

“He doesn’t speak Scouse and I don’t speak Portuguese, but you can tell from his body language that he wants to be around. He’s really embraced it.”

It’s been less than a month since Arthur was with Juventus in Serie A, so the recent drop to Liverpool’s under-21 would surely not have been part of the script when the season kicked off.

However, to hear that he is knuckling down in order to be a competitive option for Klopp bodes very well and shows his professionalism, not seeing under-21 football as beneath him despite his abundance of Brazil caps.

Having made a solitary 13-minute cameo in the Reds’ Champions League defeat to Napoli a fortnight ago, the 26-year-old will be hoping to make his loan spell at Anfield count. He certainly has the ability to do so, having completed around 66.56 passes per game over the last 12 months at a success rate of 91%.

With an average of 62.36 carries and 81.68 touches per game, he is entirely competent in possession and has the nous to pull the strings in the middle of the park.

The £125k-per-week gem Arthur clearly has a lot to showcase, and luckily for Liverpool, it also seems that he possesses the humility, desire and work rate required to burst his way into the Reds’ first team, judging by his midweek involvement at Rochdale.