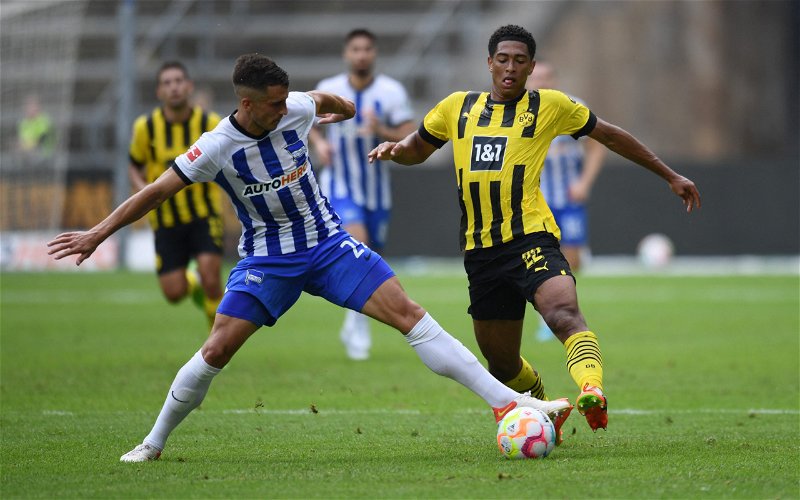 After being forced to bide their time over the signing of Jude Bellingham, the Borussia Dortmund star is now Liverpool’s long-term midfield target.

That is according to Sky Sports journalist Dharmesh Sheth via GIVEMESPORT, who claims that Liverpool will have to wait until at least next summer to sign the England international.

Sheth revealed that the Reds never stood a chance of signing the 19-year-old in the window just gone, due to Erling Haaland’s departure to join Premier League title rivals Manchester City.

Though Bellingham does remain a target with his availability anticipated next summer.

“Their long-term target is Jude Bellingham. That’s widely publicised, but it’s thought that that simply cannot happen until at least next summer.

“It’s very rare that they sell two of their prized assets in the same transfer window. Last summer, it was Jadon Sancho; this summer, it was Erling Haaland; and next summer, it’s thought that it will be Jude Bellingham.”

A move that will have Klopp and FSG cheering

At the tender age of 19, Bellingham is carving out an elite reputation over in the Bundesliga with Borussia Dortmund, and as Sheth alludes to, arguably could have made the switch to Liverpool this summer if it wasn’t for Manchester City signing Erling Haaland – with Dortmund never posed to letting both of their superstars leave in the same window.

There is no doubt that the signing of Bellingham will rock the league in the same way that Haaland has done since signing for Manchester City, in a move that will have Jurgen Klopp and FSG cheering.

Yet despite his inevitable and instant world-beating gravitas, there is a lot of potential for a youngster who chipped in with 11 attacking returns in the form of three goals and eight assists across 32 Bundesliga appearances last season, despite operating as a pivot in a 4-2-3-1 system.

With Liverpool’s calculated approach in the transfer market under the tutelage of Klopp, the signing of Bellingham, along with his inevitable transition into a genuinely world-class midfielder next summer is a given.