Liverpool will be “going all in” for Jude Bellingham 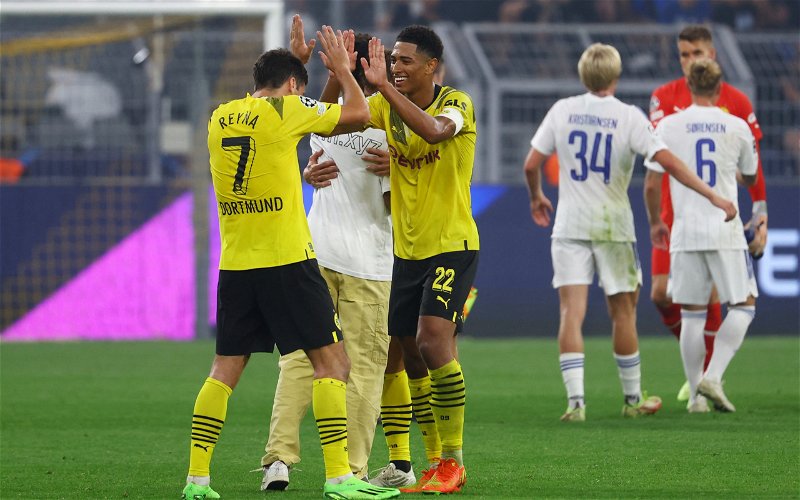 Liverpool are said to be “going all in” for Borussia Dortmund’s midfielder Jude Bellingham “at the end of the season.”

That is according to talkSPORT’s Alex Crook who claims, via GIVEMESPORT, that the England international is firmly in Liverpool’s sights, almost a week after the summer transfer window slammed shut.

Crook is confident that the Reds will win the race for his signature at the end of the current campaign.

“They’re going all in for Bellingham at the end of the season.”

Klopp will love it

The fact that Bellingham is just 19-years-of-age and can be found pulling the strings for Borussia Dortmund in the Champions League is almost mind-blowing in itself.

Playing in a double pivot in Edin Terzic’s 4-2-3-1 system on Tuesday night against FC Copenhagen, he ran the show for BVB and completed the third most passes (70) out of both teams with the likes of Niklas Sule (94) and Nico Schlotterbeck (82) the only pair who could better him.

Having averaged around 40 accurate passes per game last season in the Bundesliga at a pass completion rate of around 84%, the extra year at Dortmund, in what looks to be a third and final season, will benefit him to no end and gives him the opportunity to emerge as the talisman for a team who have lost both Erling Haaland and Jadon Sancho in back-to-back summer windows.

Last season, Bellingham achieved 11 attacking returns in the form of three goals and eight assists across 32 Bundesliga appearances last season, the England international has added end product to his game, despite his deployment in a deeper starting position.

And his goal-scoring Champions League performance on Tuesday night against Copenhagen was evidence of this in a tie that also saw him better his average of 40 accurate passes by around 30 more, demonstrating another emerging development to his game.

There is no doubt that the signing of Bellingham will rock the Premier League in the same way that Haaland has done since signing for Manchester City.

It’s a move that will inevitably see the England international complete his transition into an outright elite midfielder under the esteemed tutelage of Jurgen Klopp, who will love the latest developments surrounding the teenager.