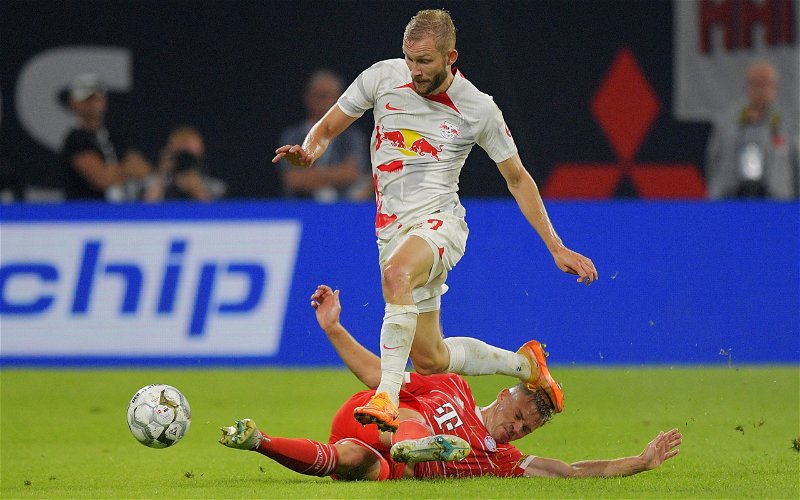 Liverpool are likely to be frustrated in their attempts to sign RB Leipzig’s Austrian star Konrad Laimer.

That is according to journalist of the highest esteem, Fabrizio Romano, who claims, via GIVEMESPORT, that the Liverpool hierarchy are hindered by complex negotiations surrounding a deal to prise Laimer from the clutches of Leipzig in the final hours of the market.

“The feeling internally at Liverpool is that it’s really complicated to negotiate with Leipzig and so it’s unlikely that they will sign Laimer in the final hours of the market.”

Disaster in the final hours

Romano’s latest update on deadline-day surrounding Laimer does not bode well from a Liverpool perspective.

The 25-year-old’s ability as a defensive-minded central midfielder represents an option that Klopp does not have in such an orthodox form.

Whilst he is entirely competent with the ball at his feet, Laimer’s main strengths are apparent during the out-of-possession phase, where he looks to win back possession in true Red Bull fashion, having been schooled in the arts of pressing for the majority of his career.

It is no surprise that the Austrian finds himself in and around the 99th percentile for his pressing efforts, having garnered a mesmerising average of 33.60 pressures per 90 which places him in the top 1% amongst positionally similar players in Europe’s top five leagues over the last 365 days.

The 25-year-old would bring stability to the midfield – something that has been lacking this season and has piled pressure on the backline, as can be seen through Liverpool’s average of 1.2 goals conceded per match this early in the season.

With Laimer now in the final 12 months of his contract at Leipzig, the Reds would have been hoping to bag a cut-price deal for the midfielder, though it looks as though it is not to be with just hours left until the summer transfer window slams shut.