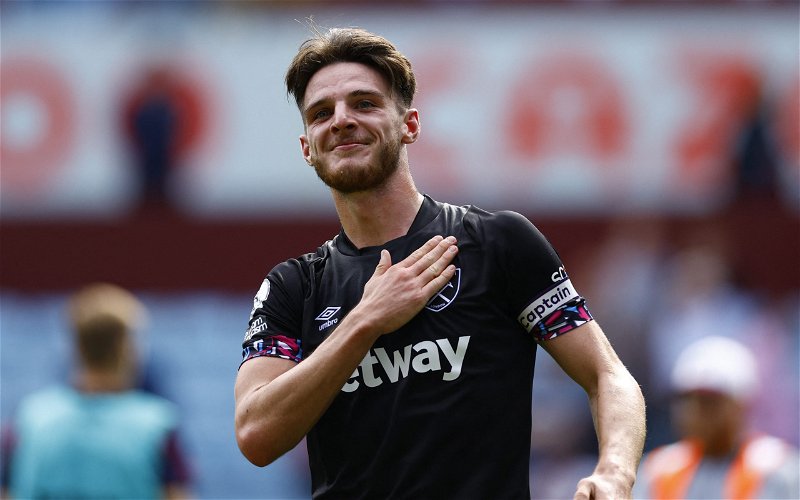 Liverpool will be looking to sign a midfielder next year and could make a move for West Ham United captain Declan Rice.

That is according to transfer insider Dean Jones (via GIVEMESPORT), who understands that Liverpool will be looking to acquire a new central midfielder in the summer of 2023.

Whilst the journalist believes that Borussia Dortmund star Jude Bellingham is a priority target at Anfield, he would not be shocked if the Reds made a move for his England team-mate Rice.

Speaking to GIVEMESPORT, Jones said: “We know that Liverpool will be in the market for a player of that type next year.

“I still think that Jude Bellingham will be the priority for them, but it wouldn’t surprise me at all if Declan Rice was mentioned.”

Whilst Jurgen Klopp bolstered the engine room with the loan signing of Arthur Melo on transfer deadline day, it is clear that his squad needs greater depth in the form of a marquee long-term acquisition, not least in their injury-plagued midfield.

The mention of Bellingham is to be expected given Liverpool’s strong transfer links with the Dortmund gem, although Rice being mooted may come as a surprise to Kopites, with the 23-year-old having been subject to strong interest from Chelsea and Manchester United in the past.

Analysing Jones’ assertion, though, it’s a signing which would fit the bill for Liverpool and their transfer model, with Rice now into the final two years of his contract with the Hammers.

Over the last couple of seasons, the West Ham captain has completed his transition from a defensive-minded engine room operator into a more progressive midfielder, averaging 52.37 successful passes per 90, at a completion rate of 89.9%, with 6.13 passes per game drilled into the final third.

Whilst he has kept that defensive solidity, averaging 5.2 tackles and interceptions per game, he has been able to demonstrate a more progressive and attacking outlook through his ability a carrier.

With around 47.89 carries per game, at a progressive distance of 164.18 yards, the Irons skipper has become a well-rounded and astute option in the middle of the park.

Although it may come as a surprise if Liverpool were to jump ahead of their more free-spending Premier League rivals in vying for his signature, there is no doubt that the England international could have a huge impact under Klopp, who will surely appreciate Rice’s balanced and mature style.