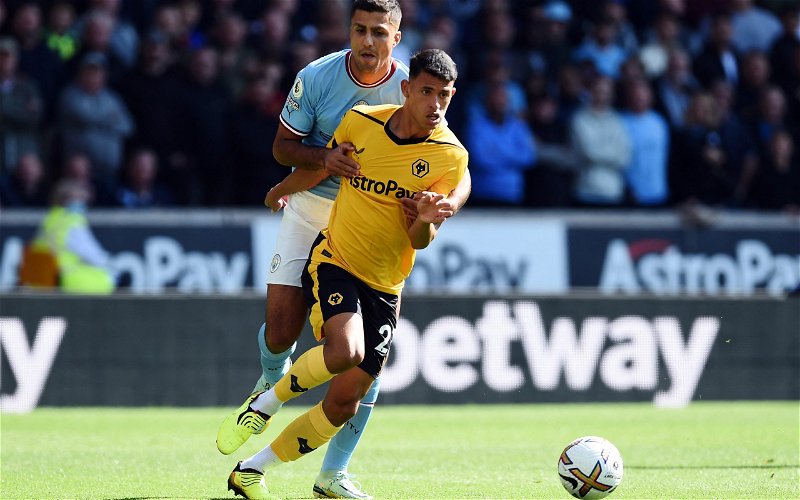 Liverpool “retain an interest” in Wolverhampton Wanderers midfielder Matheus Nunes, despite his recent move to the Premier League.

That is according to transfer insider Dean Jones, who has informed GIVEMESPORT of the Reds’ admiration for the 24-year-old prior to his arrival at Molineux in mid-August.

The journalist added that Wolves’ current focus is to transform their fortunes in the league, with everything else secondary at this point.

Speaking to GIVEMESPORT, Jones said: “Liverpool were actually interested in him before he joined Wolves. So, they will continue to retain an interest there, but Wolves can’t think about it right now – all their focus is on how this current group of players can turn around the season.”

“One of the best”

Nunes impressed during his last two seasons at Sporting Lisbon, with his Champions League performances against Manchester City earlier this year seeing him earn high praise from none other than Pep Guardiola, with the Spaniard describing him as “one of the best players in the world”.

Now under the tutelage of Bruno Lage, Nunes completes an average of 31.16 passes per 90, which places him in the 19th percentile amongst positionally similar players in Europe’s top five leagues over the past 12 months.

This is a rather low ranking, but 9.82 of these passes were made under pressure, an entirely contrasting and elite metric which duly places the Portuguese midfielder in the 84th percentile when that is considered.

Despite averaging just 52.61 touches per game, Nunes completes 2.43 dribbles per 90 with a progressive carrying distance of 133.20 yards – another solid return.

Ultimately, while he does not see much of the ball, he does a lot with it when in possession. Having chipped in with nine goal contributions in 50 appearances last season, in the form of four goals and five assists from midfield, he is a statistical anomaly and already has an assist to his name in his first five Premier League appearances.

His unique profile could well suit Jurgen Klopp’s side down to a tee, so this is one to look out for over the next couple of transfer windows.