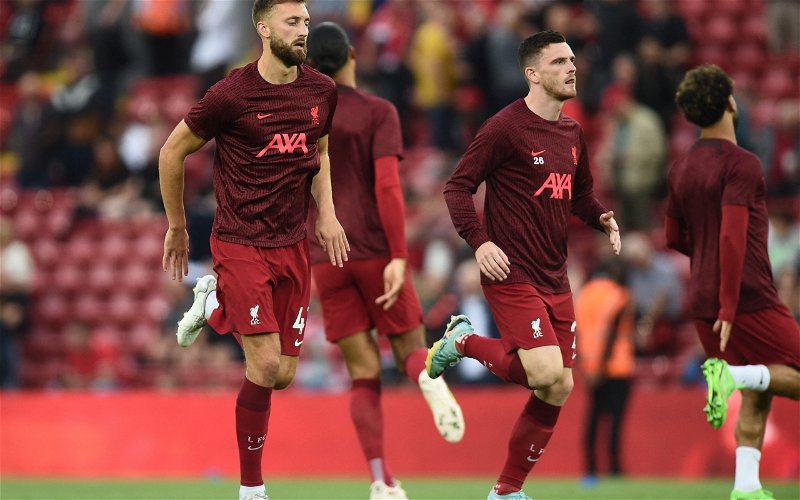 Tonight, Liverpool host Ajax Amsterdam at Anfield, in what is a historically coveted clash between two mass-possession teams.

It goes without saying that Liverpool will be desperate for a result here, after being thrashed by a resurgent Napoli side in their Champions League group stage opener.

Jurgen Klopp’s side have struggled to replicate the form that we saw last season, with confidence looking as though it has firmly hit a low point at the club.

The Reds have it all to do in a clash that they simply cannot afford to lose.

Issuing an update in Monday’s pre-match press conference, Klopp delivered injury news on yet another key player; this time on Andy Robertson.

The German boss revealed that Robertson will miss the rest of the month, minimum.

Speaking in the press conference, as per Liverpool Echo, Klopp said:

“Robbo now is not 100%, it was very late, in the 93rd minute or whatever, he actually felt it the next day only, but yes he is out and he is out at least until after the international break.”

In other news, Klopp confirmed that Curtis Jones is also not available, but there is some good news to come out of the press conference, with Fabio Carvalho now available after training with the squad on Sunday.

With Scotland captain Robertson now out of the clash, Kostas Tsimikas will of course deputise.

The Greek international has indeed made his appearances count this season, and has brought a much-needed burst of energy to his side on the four occasions that have seen him subbed on in domestic competition.

But, make no mistake, this serves as a big blow for Liverpool, who are in a really tough situation at present.

An injury to a player who offers leadership qualities, as well as astute attacking threat is devastating to Liverpool, in a time that sees seven of their outfield stars ruled out.

It does not breed confidence for a side who have already had the balance of their squad wiped out through earlier injury woes.

Coming into a game against a side who are as defensively water-tight as Ajax will be tough in itself for Klopp’s side, who have managed to score just one goal in their last two games.

A player of Robertson’s stature, who garnered 13 attacking returns in the Premier League last season, in the form of three goals and ten assists, will of course take a dimension of goalscoring threat out of the side.

It’s a real blow for Liverpool ahead of a must-win clash both points-wise, and confidence-wise.