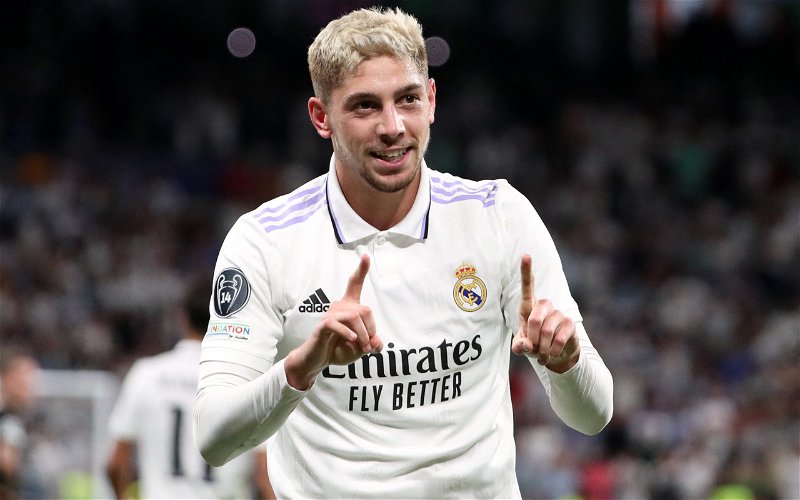 Liverpool were thought to have made a late transfer bid for Real Madrid midfielder Federico Valverde in the window just gone, according to reports in Spain this week.

However, Fabrizio Romano has shut down these claims by stating that he was not made aware of such an offer for the Uruguay midfielder.

Responding to rumours involving Valverde and Liverpool via his column on Caught Offside on Wednesday, Romano said:

“I’ve no updates on Valverde, despite Liverpool links.

“I’m told they wanted an opportunity and not a top player at the end of the market as they will focus on new midfielder in 2023.

The Italian journalist also added to the conversation on Twitter after Real Madrid overcame RB Leipzig in the Champions League last night, hailing a man-of-the-match performance from Valverde as he tweeted:

“Man of the Match. Pure leadership, one of Ancelotti’s favourites. Never been discussed on the market last August despite PL clubs rumours – he’s simply untouchable. Fede Valverde, what a player… signed for €5m fee (!).”

When looking at the numbers from Valverde’s performance against RB Leipzig on Wednesday, it’s easy to see why Romani hailed him as “simply untouchable.”

Aside from his goal in that match, the Uruguayan won four duels, created one ‘big chance’, recorded an 86% pass completion rate and won one tackle, proving effective both in and out of possession as he recorded his team’s second-highest Sofascore rating of the night with 7.5.

The pressure from the unorthodox winger without the ball alleviated pressure from Leipzig’s transitional play, in what is a testimony to his function in Carlo Ancelotti’s Real Madrid side.

Valverde’s attacking threat is improving out wide too, with the 24-year-old amassing four attacking returns (in the form of two goals and two assists) across his last four games in all competitions.

Functioning as a well-rounded and selfless winger in Ancelotti’s setup, in a deviation from his usual central midfield role, you can understand why his role in the team is pivotal, with the Uruguay international able to shine in both phases of the game.

Considering Liverpool’s paucity of midfield options lately, it’s beyond doubt that he would seem like the perfect target for the Reds, but it’s also easy to see from performances such as last night why Romano – and seemingly Real Madrid – deem him “simply untouchable”.