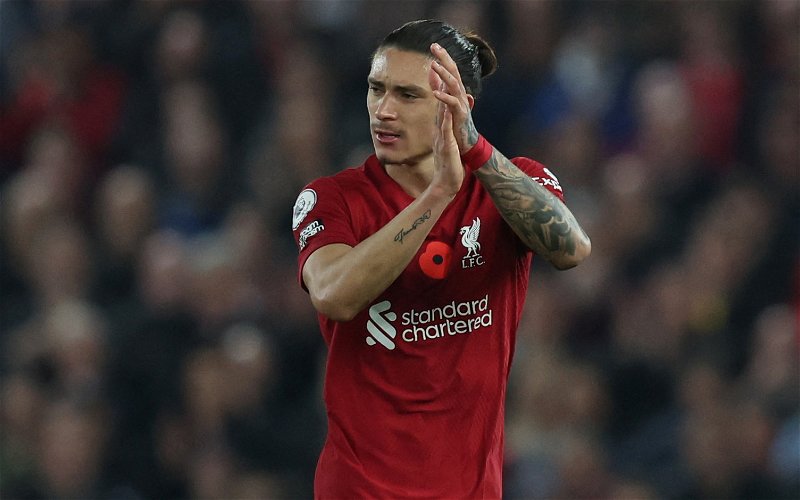 The forward moved to Anfield in a deal worth £85m this summer and has attracted some criticism, but is finally finding his feet in the Premier League.

With nine goals in 18 games across all competitions, it has been a fairly productive start for the ex-Benfica star, but Liverpool have failed to replicate their stunning form from last season which saw them win the Carabao and FA Cup competitions, and currently sit sixth in the Premier League.

The 23-year-old netted twice in their 3-1 win over Southampton at the weekend, and was named in Shearer’s Premier League Team of the Week.

“(He) crowned an impressive display with a first-half brace. He is adapting brilliantly to Klopp’s new system,” the former England striker stated.

In recent weeks the German has transitioned from using a 4-3-3 to a formation which resembles a 4-4-2, and Nunez started upfront alongside Roberto Firmino.

Both strikers were on the scoresheet, and the qualities of the Uruguay international were on full display, showing that he has taken to this new shape like a duck to water.

With Luis Diaz and Diogo Jota both injured, Klopp’s hand was forced as he sought out a solution to the Reds’ poor form, and this shape seems to have kicked his side into gear.

“Just watching him (Nunez) in training and his attributes, his willingness to work for the team, he is obviously great in the air, a big presence, great strike with both feet, he hits it early, wants to score goals,” teammate James Milner stated.

“He is a different type of striker to the other guys up there and that’s obviously great for us as a squad to have these players who all have different attributes.”

The £140k-per-week attacker will be hoping to continue this form once the Premier League resumes following the conclusion of the World Cup, and silence his critics once and for all.