Liverpool not in for Coutinho 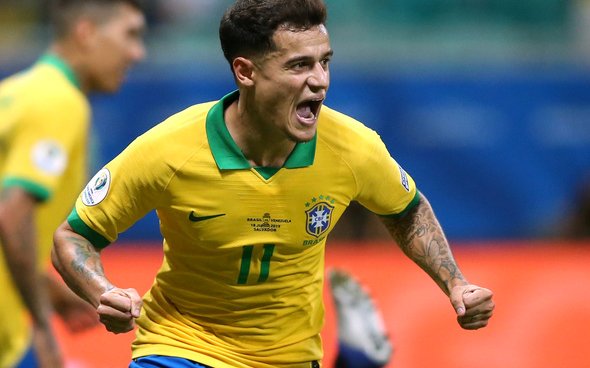 Liverpool are not interested in re-signing Philippe Coutinho from Barcelona due to the way he left the club in January 2018, according to Kaveh Solhekol.

Coutinho, 27, joined Barca for £142million last year but his exit from Anfield was not without its controversies.

Speaking live on Sky Sports News on Tuesday night [07:49pm], Solhekol claimed that is why the Reds are not eyeing up a return for the Brazil international but if Jurgen Klopp did want him, then he would be able to get his man.

“I think it’s to do with the way he left the club,” said Solhekol. “The way he left Liverpool and agitated for a move to Barcelona.

“We had that whole situation where he wasn’t playing because he had a back injury.

“They came so, so close to winning the title last season. They won the European cup.

“You’ve got to trust in Jurgen Klopp. If Jurgen Klopp wanted Philippe Coutinho, I think he would be able to pull that deal off and I’m sure Liverpool owners would back him.

Liverpool need a player like Coutinho – but they do not need Coutinho himself. Not only did the Brazilian playmaker leave Liverpool in acrimonious circumstances but he has also gone a bit backwards during his time at Barcelona. Should the Reds really be looking to feed off the scraps of a team who they beat in the Champions League last season? Klopp has not strengthened his first team this summer because it’s so hard to do when the squad he has is so good. Liverpool are reigning European champions and would have been Premier League champions too if Manchester City hadn’t just about bested them. Although there are improvements that can be made it will cost a lot of money to upgrade on their current players and Coutinho, for all the hassle he caused, just wouldn’t be worth it. Liverpool fans should just be happy that they have not lost any of their key players this summer as they aim to win their first ever Premier League title.

Liverpool: Gabby Agbonlahor claims injured Thiago must not be “selfish”