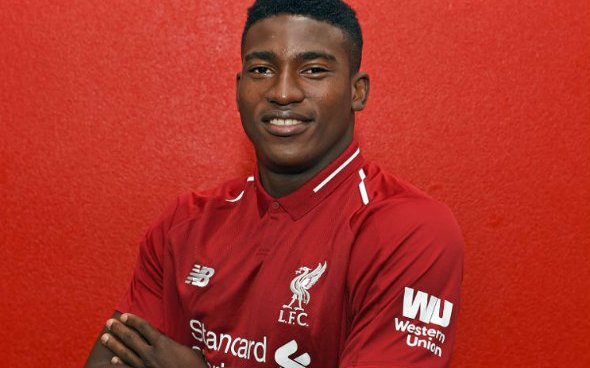 OGC Nice are leading the race to take Liverpool striker Taiwo Awoniyi on loan next season, according to Complete Sports.

The 21-year-old has yet to make an appearance for the Reds, but hit 14 goals during two different loan spells in Belgium last term.

It is understood that Nice, managed by former Arsenal star Patrick Vieira, are keen to take the Nigerian to France for the 2019/20 campaign, but they will face competition from Metz and Toulouse, as well as Club Brugge, Mainz and Hertha Berlin in their pursuit for the young hitman.

It’s a real shame that work permit issues have held back Awoniyi from making his bow in a Liverpool shirt. Everywhere he has gone on loan he has scored goals, and it’s promising to see that with every passing season, he seems to be turning out for bigger and better clubs. If Nice were to land him, it would be a fantastic deal for both player and club. One goal every 181 minutes in the Belgian league last season is a seriously impressive return [Transfermarkt], and that natural finishing streak, partnered with a good understanding of how to work defenders and a great sense of vision, stand Awoniyi in good stead. Whether he will ever make it as a Liverpool player is hard to say, and competition is certainly stiff, but if he can bide his time, keep on growing, and get his permit sorted, who knows where the young Nigerian could end up.