Liverpool manager Jurgen Klopp would be wise to make three changes to his team for Saturday’s visit of basement dwellers Watford.

The Reds are coming off the back of securing their passage through to the knockout stages of the Champions League as group winners after their 2-0 victory at Red Bull Salzburg on Tuesday.

However, centre back Dejan Lovren picked up an injury in that game, meaning that he, Georginio Wijnaldum and Roberto Firmino should all drop out against the Hornets.

Instead, Joe Gomez, Alex Oxlade-Chamberlain and Roberto Firmino must start. Those three changes would likely be enough for the Reds to put up a potentially embarrassing scoreline on Saturday.

Alisson has now moved on from the injury and suspension that has blighted the start of his second season on Merseyside, and so the Brazilian will almost certainly start here.

Trent Alexander-Arnold is a similarly sure bet to take up residence at right back, as usual. Meanwhile, the same can surely be applied to Andrew Robertson on the opposite side of the defence.

At centre back, there’s simply no point risking Lovren when Gomez is right there, ready to replace him. Alongside the English international, why Virgil van Dijk, of course.

Jordan Henderson are Naby Keita both have the look of sure-fire starters in central midfield given their recent form. However, Oxlade-Chamberlain must replace Wijnaldum alongside them.

Further forward, Firmino has been somewhat off the boil of late. With Origi a more than capable replacement, the Belgian should come in for the 28-year-old to partner Mohamed Salah and Sadio Mane in attack. 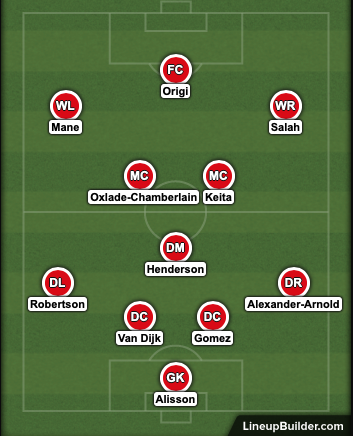