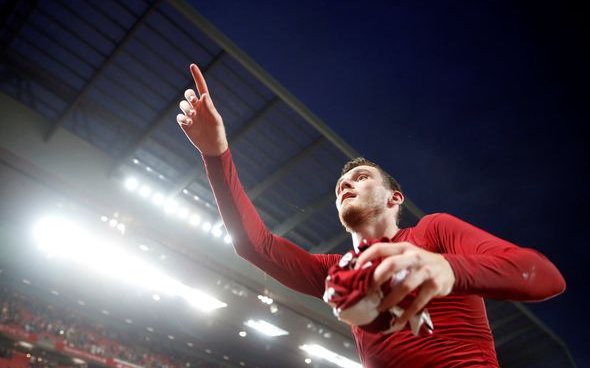 A number of Liverpool fans were drooling over a short video clip of defender Andrew Robertson that was posted on Twitter by Reds supporter @LFCLaurie.

The 13-second clip shows the Scotland left-back in action against Manchester City during a pulsating 4-3 Premier League win from January 2018. Even with the Reds 4-1 to the good in the 75th minute and their visitors in possession in their own half of the pitch, Robertson relentlessly chased down several opponents before the ball was worked back to goalkeeper Ederson. After he was closed down by the Liverpool man, the Brazilian hastily passed the ball on to Nicolas Otamendi, who was eventually adjudged to have been fouled by Robertson for a slight tug.

The moment we all fell in love with Andy Robertson. pic.twitter.com/1HJibVrpar

Despite Pep Guardiola’s side subsequently scoring twice to set up a very nervy finish to an Anfield classic, @LFCLaurie saw fit to describe the footage as “the moment we all fell in love with Andy Robertson”. Now 26, the Scot initially had to play second fiddle to Alberto Moreno for the left-back slot during his first season at the club but got his break after an ankle injury to the Spaniard and has never looked back, making the PFA Team of the Year and UEFA Champions League Squad of the Season in 2018/19.

These Liverpool fans hailed Robertson as a “warrior” and “a beautiful pest” after seeing the footage of his determination in the win over Manchester City from two years ago:

A pest, a beautiful pest troubling the opposition.

Love it. Always reminds me of when I let my dog off its lead.

I was wanting that to continue for just a few seconds more so I cud hear the roar of the crowd as @andrewrobertso5 trots bck knowing he’s just initiated himself into lfc folklore ???

Liverpool fans, was that the day you were truly convinced that Robertson would go on to become such an integral player for Jurgen Klopp’s side? Comment below with your views!