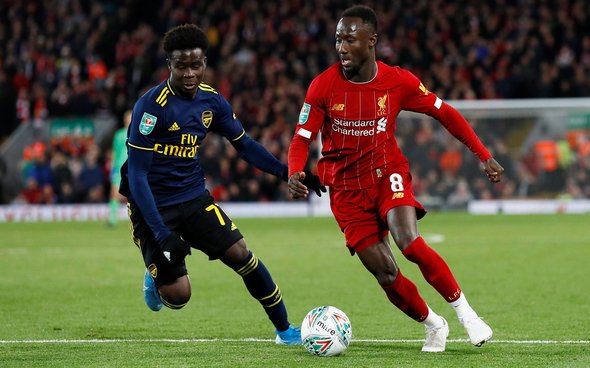 Liverpool midfielder Naby Keita has been ruled out of tonight’s FA Cup fifth round clash against Chelsea, prompting criticism of the 25-year-old from some Reds fans on social media.

Speaking to liverpoolfc.com ahead of the game, Jurgen Klopp confirmed that the Guinea international would not be fit enough to feature at Stamford Bridge, having also missed Saturday’s defeat at Watford due to a minor hip injury. The manager made the somewhat contradictory claim that Keita’s injury was “not serious but obviously serious enough” but is hopeful that the midfielder will be available for selection for next Saturday’s Premier League clash against Bournemouth, as shared by @LFC on Twitter.

Jürgen Klopp is hopeful Naby Keita will be available for selection again when #LFC face @afcbournemouth in the @premierleague at the weekend.https://t.co/nXjG1Y4uoF

Keita’s two-year Liverpool career has frequently been interrupted by injury. He missed the end of last season due to a groin injury and was ruled out for 10 games with a torn muscle bundle at the start of this term. He also sat out most of January because of a groin strain and has managed a paltry four starts in the current Premier League campaign, and these Reds fans on Twitter are losing patience with the injury-prone 25-year-old:

Sooner this lad is binned the better. Done with him and his fanboys now.

A brilliant hospital patient whose career has been ruined by football

Made of polystyrene that man

All these injuries…its getting really annoying now..

Forget One Punch Man. We’ve got the One Match Man.

Time to sell naby, just like sturridge. Waste of money

Liverpool fans, have you lost patience with Keita over his frequent injury woes or do you feel he has been highly unlucky? Join in the discussion by commenting below!