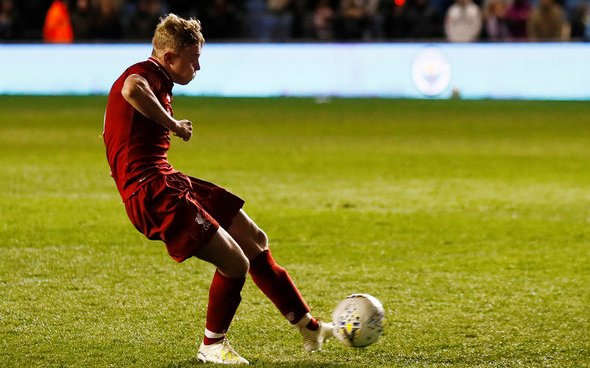 Promising Liverpool striker Paul Glatzel has provided an encouraging update on his recovery from long-term injury, targeting a return to full training once the squad reunites following the current lockdown.

The 19-year-old tore his anterior cruciate ligament (ACL) in a pre-season friendly against Tranmere nine months ago and has been rehabilitating ever since. He gave an update on his fitness in an interview with Liverpool’s official website this morning.

Glatzel told liverpoolfc.com: “I’m basically at the end of my rehab. I was meant to be back training, I should have been back around now but obviously with what is going on it’s not possible at the moment. So I’m just making sure I do my fitness stuff I’ve been sent from the club and just waiting for all this to take its course and then be back on the pitch when we’re allowed.”

He added: “I’d hope to be able to get a few training sessions in pretty soon when we come back. I’ll probably have to do a little bit more rehab and then hopefully get back into training. Then wait and see what happens. Hopefully I can get a few minutes but I’ll just have to see what happens and focus on getting back to full fitness.”

Glatzel’s star had been nicely ascending prior to his ACL injury, having captained Liverpool’s under-18s to their FA Youth Cup triumph last year and scored eight times in that cup run, along with 11 goals in 15 matches in the Under-18 Premier League. He started for the first team in their pre-season friendly at Tranmere in July, setting up a goal for Bobby Duncan, but tore his ACL that fateful evening. It was the latest in an incredibly unfortunate line of severe injuries, having also been through a long-term hamstring injury and broken his leg.

No date has yet been set for the return of the Premier League amid the coronavirus pandemic, although the EFL seems to be targeting mid-May for the potential resumption of training and then fulfilling remaining fixtures over eight weeks in June and July (as per The Guardian). If the Premier League adopts and executes a similar time frame, that would give Glatzel several more weeks to make further progress on his recovery, so the current cessation of football could work in his favour and give him more scope to rehabilitate fully.

Also, with Liverpool requiring just two more wins from nine matches to be confirmed as champions, Jurgen Klopp might decide to give the youngster a couple of games towards the end of the season if the Reds have the title safely wrapped up. Glatzel has had a torrid few months but circumstances and his determination to recover fully may hopefully see him rewarded with a competitive first team debut over the summer.

Liverpool fans, are you hopeful that Glatzel might get a couple of Premier League appearances this summer if the season resumes in the coming weeks and the Reds seal the title with games to spare? Have your say by commenting below!