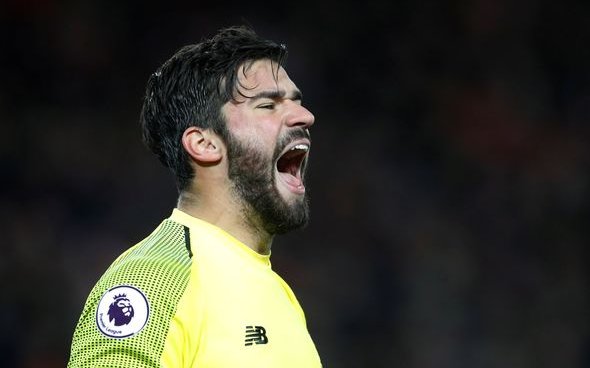 While the ex-Southampton player acknowledged that the Brazilian has been “impressive” for the Reds, he plumped for the English ‘keeper as his choice in nets when picking his Premier League XI for 2019/20. [via Sky Sports]

Le Tissier explained to Sky Sports: “Every time I have watched Burnley, he has been impressive and made key saves in many games. Nick Pope has the most clean sheets out of anyone in the Premier League. Dean Henderson has been impressive, as has Alisson, but I am just edging with Pope.”

Le Tissier is justified in his praise of Pope, who indeed has kept more clean sheets in the top flight (11) than any other goalkeeper this season and has made 87 saves in the current campaign, the seventh highest figure in the Premier League.

However, when it comes to the concession of goals, Alisson has vastly outperformed the Burnley man. Pope has played 29 matches this season and let in 40 goals, an average of 1.38 goals per game. By contrast, Liverpool’s goalkeeper has featured in 28 matches in all competitions this term and been beaten only 17 times, which works out at 0.61 goals conceded per game – less than half the concession rate of Pope.

Alisson has officially kept 10 Premier League clean sheets this season but has actually played 12 league matches (out of 20) without conceding a goal – in Liverpool’s 4-1 win over Norwich (when he incurred a calf injury) and 2-1 defeat of Brighton (when he was sent off), the Reds did not concede until after he had left the pitch.

Another sign of Alisson’s importance to this Liverpool team is the far higher frequency with which they concede goals when he hasn’t played. Adrian, who has deputised in almost every match in which the Brazilian hasn’t featured, has been beaten 24 times in 18 appearances (1.33 goals conceded per game), highlighting the difference to the Reds between when Alisson plays and when he doesn’t.

While Pope has been quite impressive for Burnley in recent months, statistically there is no comparison between him and Alisson, so Le Tissier’s preference for the Englishman over the Liverpool ‘keeper seems a little peculiar.

Liverpool fans, were you surprised by Le Tissier choosing Pope over Alisson for his team of the season? Comment below with your views!