Jamie Carragher: Liverpool need to invest to keep them where they are 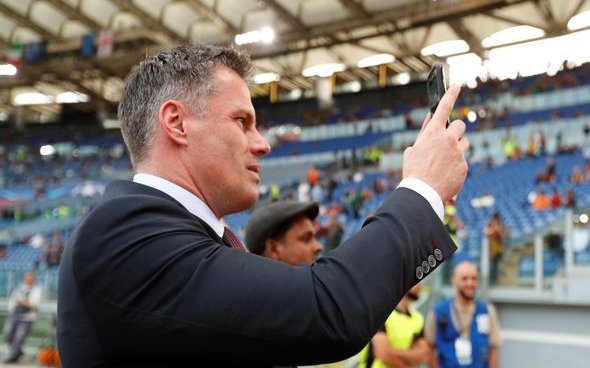 Former Liverpool player Jamie Carragher has urged the club not to stand still in the transfer market this summer and believes that they need to strengthen in two positions in particular.

Speaking on Sky Sports‘ The Football Show, the pundit feels that the Reds need to bring in a striker and another left-back in the summer, believing that Jurgen Klopp has been fortunate not to lose key players in some positions through injury.

Carragher said: “I think there could be something more in reserve for the front three. I think Liverpool have been lucky in that the best players and most important players for Jurgen Klopp have never really suffered injury-wise, certainly big injuries, if you think of the front three, the full-backs and Virgil Van Dijk.

“Can there be more back-up if something happens? Certainly with Andy Robertson at left-back, probably the only recognised left-back at the club. I just think Liverpool need more than Divock Origi as back-up for the front three when they’re out, and hence why Liverpool have been linked with Timo Werner. I actually do think Liverpool need to invest to keep them where they are.

“So certainly for me, a strong understudy to Andrew Robertson, and certainly someone who is really going to push that front three. I think they certainly need to spend big to keep them ahead of the pack.”

Carragher is quite justified in citing the left-back and centre-forward areas as priority positions for Liverpool in the transfer market. As he has said, Robertson is the only natural senior left-back at Anfield, with midfielder James Milner occasionally being asked to deputise in that role during the season.

Given that the Scot is such an important attacking outlet for the Reds (20 assists since the start of 2018/19), losing him for a prolonged period would be calamitous for Liverpool unless they add bespoke reinforcements in that area. At least transfer reports linking them with possible moves for Bukayo Saka (Football London) and Layvin Kurzawa (Sport) hint at a desire to address the lack of cover for Robertson.

Regarding Liverpool’s attack, Carragher’s reservations here are understandable. While each of the first choice front three of Mohamed Salah, Sadio Mane and Roberto Firmino has again hit double figures in terms of goals this season, Klopp does not have huge strength in depth in the forward positions. Origi has chipped in with five goals this term but, even with him not being a regular starter, that tally pales in comparison with the 27-goal haul of Werner, who has been tipped to join Liverpool by German journalist Christian Falk (as per Passione Inter).

Meanwhile, backup wingers Xherdan Shaqiri and Takumi Minamino have contributed one Liverpool goal between them this season, a meagre return even allowing for the former rarely featuring and the latter only coming to the club in January. When you consider that six of Manchester City’s forwards or attacking midfield players have seven goals or more in 2019/20 (as per TransferMarkt), their greater depth of potent options in the final third in comparison to the Reds is clear and concerning.

Liverpool may be well clear of the rest of the Premier League field for now but, as Carragher has said, there is still ample room for improvement in Klopp’s squad – and it could be needed to prevent the likes of Manchester City, champions in the last two seasons, from passing them out again.

Liverpool fans, do you agree with Carragher’s assessment of the Reds’ squad? Which positions do you feel should be prioritised in the transfer market? Join in the discussion by commenting below!