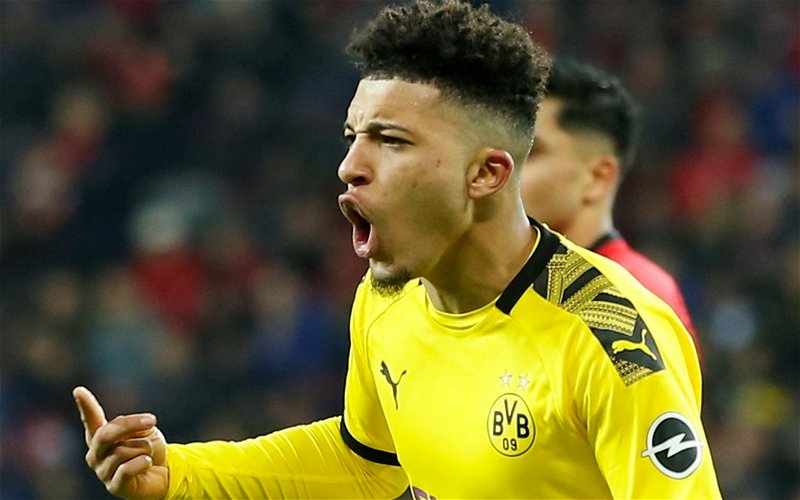 Former Liverpool player Jamie Redknapp has said that he would like to see “genuine superstar” Jadon Sancho coming to Anfield this summer but expects the Reds to miss out on his signature.

As per the Daily Mail, the Borussia Dortmund winger has been linked with a possible move to the Premier League leaders, although The Mirror‘s David Maddock subsequently claimed that Liverpool aren’t in the running to sign him. However, as noted by Sky Sports, Manchester United are heavily linked with the 20-year-old England international, and Redknapp thinks that Old Trafford is the player’s likeliest destination.

Speaking on Sky Sports [via Liverpool Echo], the pundit said: “I think it is a matter of time with Jadon Sancho coming to the Premier League. We are talking about a genuine superstar. A player that can do incredible things with the ball. Played 70 odd games in the Bundesliga, scored 27 goals from a wide area which is very good.

“We have missed out on the likes of the Neymar’s in the Premier League but he can come and really light it up. Personality I would call it. He will be a great signing for whoever he goes (to). I would like to see him at Liverpool, but I think he is going to end up at United though.”

As Redknapp has stated, Sancho has accrued a wealth of Bundesliga experience and a fine scoring record in the German top flight at a very young age – his actual return is 27 goals from 69 games in the division for Borussia Dortmund, 14 of which have come this season. He has a total of 17 goals from all competitions in the current campaign, with an even split of eight each from the left and right flanks (plus one in a central playmaker role), a return which puts him in a similarly prolific bracket to Liverpool’s first choice wingers Sadio Mane (18 goals this season) and Mohamed Salah (20 goals).

In addition to finding the net regularly, Sancho is also a fantastically reliable creator of goals, with 19 assists to his name this season and 42 in 90 senior appearances for Dortmund. By comparison, Liverpool forwards Roberto Firmino and Mane have 12 assists each this term, with Salah further back on nine. The England prodigy’s figures indicate that he is a winger who would add huge potency and creativity to any team for which he features.

It’s easy to see why Redknapp would like to have him at Liverpool and it would represent a disappointment if the Reds were to lose out to Manchester United for his signature – even with the Old Trafford club not in the Champions League and trailing their Anfield rivals by a huge distance domestically, they still seem to have enough pulling power to sometimes trump the Merseysiders in the transfer market. However, even if Liverpool don’t manage to lure Sancho to Anfield, having Mane and Salah as first choice wingers is more than a mere consolation.

Liverpool fans, would you be disappointed if Sancho were to join Manchester United instead of coming to Anfield? Do you think the Reds have a realistic chance of landing the 20-year-old? Comment below with your views!