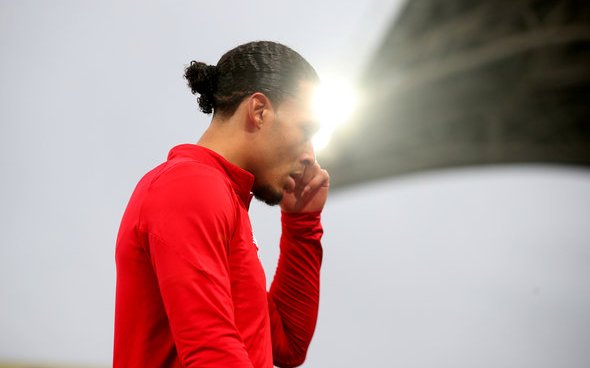 A number of Liverpool fans have suggested that Virgil van Dijk could have prevented the Reds from suffering a fateful blow to their Premier League title hopes in 2014.

Six years ago today, a square pass from Mamadou Sakho to Steven Gerrard led to the latter losing his balance and Demba Ba duly seized upon the loose ball with a huge expanse of open space ahead of him, finishing one-on-one past Reds goalkeeper Simon Mignolet (as per BBC). That was the opening goal in a 2-0 home defeat which saw Manchester City regain the advantage in the title race and ultimately finish as champions.

Empire of the Kop on Twitter (@empireofthekop) shared a clip of that infamous goal with the caption “Alisson saves that”, which led numerous Liverpool fans to respond by claiming that it would never have happened if Van Dijk was playing for the Reds that day.

The Dutch centre-back, who has averaged 0.8 tackles and one interception per game in this season’s Premier League, is renowned for his pace – as per 90min.com, he recorded the fastest sprint in the 2018/19 Champions League. He also has a flair for playing forward, diagonal passes (as per Football Whispers) when the opportunity presents itself.

In light of those considerations, these Liverpool fans on Twitter believe that Ba would not have scored at Anfield on 27 April 2014 had Van Dijk been part of the Reds’ defence at the time:

Behave virgil would have got to him

Van Dijk wouldn’t have even bothered to pass it to Gerrard there. He would have taken ownership and played a forward pass himself. This is the downfall of sometimes having a player that is too big in comparison to those around him.

Virgil wouldn’t have played the ball Sakho did, he would’ve switched the play to the far right right onto the toe of what would now be Salah

Van Dijk gets there first.

Liverpool fans, do you think Van Dijk would have stopped Ba’s goal from happening in 2014 and would that have prevented the Reds’ eventual collapse in the title race? Share your views in the comments section below!