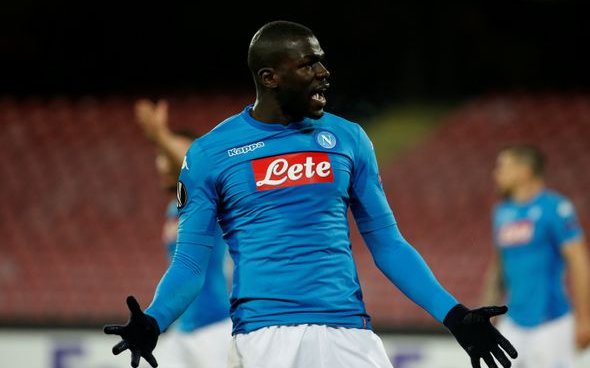 Liverpool have reportedly made contact with Napoli about a possible move for Kalidou Koulibaly and could consider selling one of their current centre-backs as a result.

Italian media outlet Tuttomercatoweb reported [via Sport Witness] that the Reds have contacted the Serie A club about the possible signing of the Senegal defender, adding that Jurgen Klopp may subsequently consider the sale of Joel Matip.

According to Tuttomercatoweb, Koulibaly had been rated at €100m (£87.38m) by Napoli but his valuation has diminished due to declining market conditions arising from the coronavirus pandemic. The club’s chairman Aurelio De Laurentiis is prepared to dispense with the 28-year-old if funds are needed should they fail to qualify for next season’s Champions League – a probable outcome as they are currently nine points adrift of fourth place in Serie A.

The Senegal centre-back has the experience of 233 games for Napoli, with 25 of those at Champions League level. A regular starter for Gennaro Gattuso’s side, he has an excellent tackling record of 2.6 per game in Serie A this season, along with a match average of 1.1 interceptions. Aside from being an astute ball winner, he also uses possession intelligently, boasting an 89.3% passing success rate from an average of 64.7 passes per game.

Koulibaly was described as “currently the best defender in the world” by former Juventus, Lazio and Atalanta defender Guglielmo Stendardo (as per Football Italia). According to FourFourTwo, the 1.87m-tall Napoli man is “a robust, physically imposing central defender” who has duly earned the nickname K2 from some of the club’s fans.

How does Koulibaly compare to Matip and Liverpool’s other centre-backs?

Koulibaly would greatly strengthen Liverpool’s defence in terms of tackling, with his match average far superior to Matip’s 1.5, the highest figure for this metric among the Reds’ centre-backs. He also has a better passing accuracy rate than any of his peers at Anfield, eclipsing Virgil van Dijk’s 89.2% and outperforming Joe Gomez’s 88.4% success rate. [via WhoScored]

However, those are the only traits where he would be discernibly likely to improve Liverpool’s back four. Despite his aforementioned reputation as a defensive powerhouse, his average of 2.3 successful aerial duels per game falls well below the 5.1 of Matip and Dejan Lovren, with Van Dijk also way ahead on 4.9 successful headers per game. Also, his interceptions per game average is inferior to Matip (1.5) and Gomez (1.3) and only marginally better than Van Dijk and Lovren with one each per game (as per WhoScored).

Koulibaly is a couple of months older than Matip, the man reportedly being considered dispensable in order to make way for the Napoli defender, while the Cameroonian centre-back is far stronger in the air and has a better interceptions record. It should also be noted that Koulibaly has had substantial injury problems this season, barely playing since mid-December due to a muscle injury and thigh problems (as per TransferMarkt).

Liverpool only have four senior centre-backs as it is and, even if Matip isn’t sold, Lovren has been linked with an exit from the club by the Daily Express. It would be very risky for Klopp to leave himself with three or fewer centre-backs after the summer transfer window and, with Koulibaly not seeming an emphatic upgrade on Matip, it would be a highly foolish move by the Reds to sacrifice the Cameroonian in order to facilitate any deal for his fellow African defender.

Liverpool fans, do you think Matip could be sold if Koulibaly arrives at Anfield? Should the Reds be targeting the Napoli defender as a possible signing? Join in the discussion by commenting below!