Lincoln City 2-7 Liverpool – What did we learn? 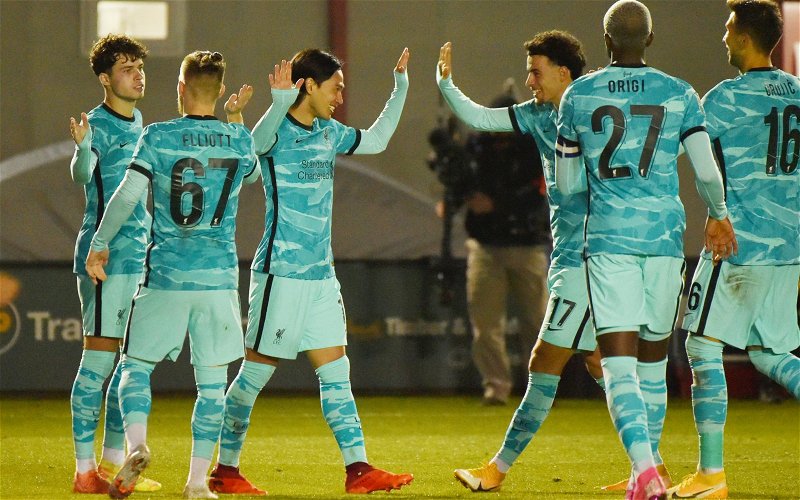 I doubt there is anyone out there that would have predicted that scoreline. What an incredible match, and we took a lot from this game.

Jurgen Klopp went with a bold lineup, to say the least, something that Pep Lijnders highlighted the day before. We would not be fielding a weak team at the LNER Stadium, and it’s safe to say that he was right.

The German tactician initially went with a 4-2-3-1 formation with Origi being at the tip of the attack. But as the game went on, Elliott moved alongside the Belgian striker and it appeared to be a 4-1-2-1-2 setup, with both Kostas Tsimikas and Neco Williams getting forward as we’ve seen with Andy Robertson and Trent Alexander-Arnold in recent years. Another example of Klopp’s ideas embedding at every level.

Nevertheless, we were irresistible first half. As each goal went in, the finishes got better and better. It was almost a competition between Takumi Minamino and Curtis Jones as to who could get the ball furthest into the top corner. For me, both lost out to Xherdan Shaqiri after his stunning free-kick got us going after eight minutes.

It was disappointing conceding those two goals in the second half, something that defender Rhys Williams will learn from after making his first-team debut last night.

As I’ve previously said, I’m relieved that we are taking this competition seriously. Doing so illustrates our squad’s strength in depth and provides an element of unpredictability to the team. Again, something that Lijnders’ touched on while discussing the signing of Thiago Alcantara from Bayern Munich.

I’ve picked out two players who impressed me during the 90 minutes. They are as follows.

Sometimes we get ahead of ourselves with the local lad, comparing him with Steven Gerrard, which probably puts unnecessary pressure on his shoulders. But the more I see him play, the stronger I feel that he can do great things for our club in the future.

His two goals were outstanding, especially the one where he dragged the ball onto his right foot and unleashed an unstoppable curling effort past the helpless Alex Palmer in between the Lincoln sticks.

Even his post-match interview impressed me. Just how planted and composed he is, not getting ahead of himself and always focusing on what’s up next.

Jones will be a key part of our squad this season. His goal against Everton last season appeared to be the catalyst, and his brace last night reminded us what he is capable of on his day.

I hold my hands up guilty as charged and admit that I have a soft spot for Grujic. Before kick-off, I was hoping that he would have a good game after being impressive during his two years on loan at Hertha Berlin in Germany.

The Serbia international rarely put a foot wrong during the 90 minutes, accumulating a pass success rate of 91% and had more touches of the ball than any other player, as per Sofascore.

Klopp gave him the keys to control the tempo of play last night, and he did it, regardless of the quality of opposition, he got the job done.

To me, it’s clear that Gruijc has a future at this club. But with Thiago coming in, I still fear that he could be starved of game time. I sincerely hope not.