Gini Wijnaldum calls for patience over his Liverpool future 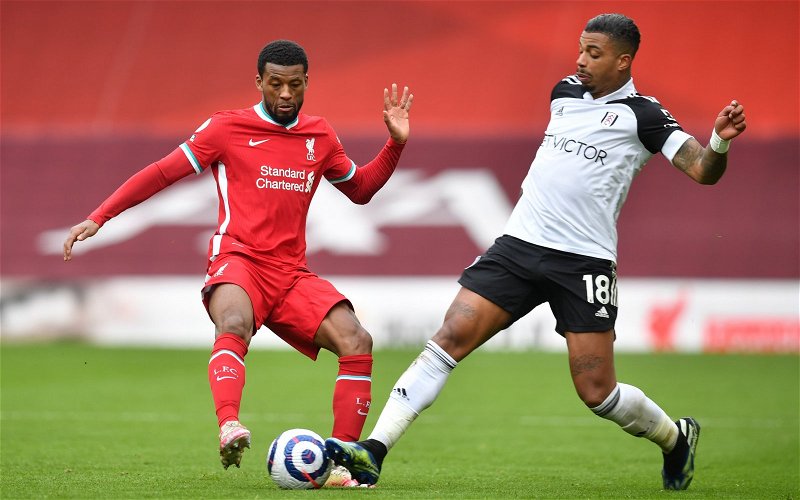 Gini Wijnaldum has called for patience over his Liverpool future, with the midfielder more keen on focusing on improving the Reds’ terrible form.

The Dutchman has been a great player under Jurgen Klopp, joining from Newcastle United in the summer 2016 and being a key man ever since.

Wijnaldum’s time at Anfield could be coming to a close this summer, however, with the 30-year-old yet to sign an extension on the deal that runs out at the end of the season.

Speaking to beIN SPORTS [via TEAMtalk] on Sunday, the Netherlands international remained coy over his future, instead saying he wants to focus on helping Liverpool overcome their current woes, following six home Premier League defeats in a row:

You want to hear what’s going to happen but on the other side, for me, if there’s nothing to say and no news I cannot say something.

I hope they can understand that and I hope they will stay patient until there’s news. The most important thing right now is that we fix things in the game as a team and we get results.

Talking about an individual, in this case about me and my contract situation – because I just said there’s no news, I think we can focus on better things than on my situation.

When there is news, we will bring it out.

It is a typically sensible approach from Wijnaldum and one that proves his mind isn’t elsewhere and concentrating on a move to another club.

The midfielder has arguably been one of Liverpool’s most consistent players this season, also staying fit amid the Reds’ injury crisis.

The hope is that Wijnaldum eventually decides to stay put, signing a new contract that sees him remain at Anfield for a number of years still.

His final decision may not arrive for a while, but if he does leave, replacing him will be a tough task, considering what an influential performer he has been for the Reds.