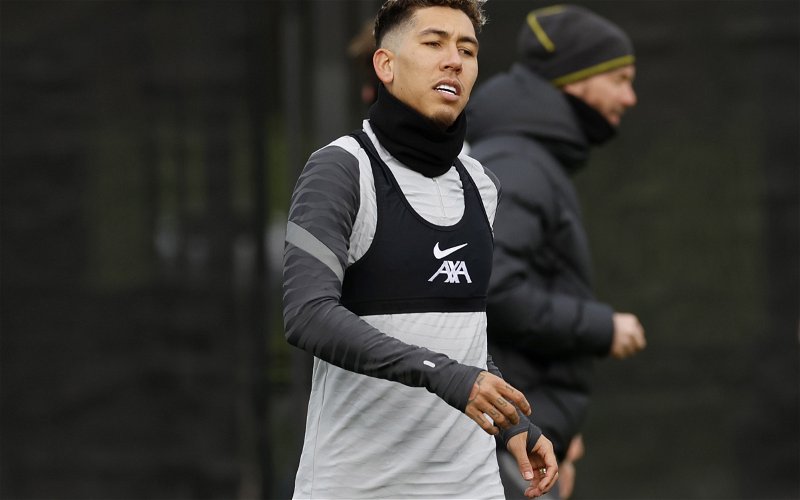 Jurgen Klopp has delivered a fresh update on the fitness of striker Roberto Firmino ahead of Liverpool’s upcoming Premier League fixture against Everton on Sunday afternoon.

The Lowdown: Cause for concern

The 30-year-old had to miss out on the Anfield outfit’s 4-0 win over Manchester United during midweek as a result of sustaining a foot injury in the final stages of the Reds’ FA Cup semi-final.

However, the German manager has now shed some positive light on the situation and has hinted that the Brazilian could be involved in the Toffees encounter.

When asked for a definitive answer surrounding Firmino during his pre-match press conference on Friday afternoon, Klopp said:

“Bobby, getting better and better. It’s just uncomfortable, painful. Today it’s his first day on the pitch, so there’s still two days to go, so maybe.

“If Bobby gives the thumbs-up then he will be involved. And not, then we wait another few days, but then I think after that it should be possible.”

If the £34.2m-rated talisman is available for selection to face his Merseyside rivals, then this will be a huge boost for the Reds who could do with having all of their attacking firepower accessible to them as they enter the final run-in.

The 55-time international has only made 18 Premier League appearances so far this season, but in that time has managed to score five goals and register three assists, as per Transfermarkt, showing just how much of an instant impact he can have when given the chance.

Despite not being at the top of the pecking order to lead the line of late, the 54-year-old boss has always been full of high praise for his number nine. He said:

“He’s a very important player for us. He’s a connector. He’s the best offensive defender I ever saw in my life, definitely.

“He’s a ball-chaser. He’s incredibly smart with all the things he’s doing. He’s technically on the highest level. He’s able to play in the smallest spaces, the tightest spaces. He can make incredible, good decisions in a really short time, and, on top of that, he scores goals as well.”

Liverpool currently find themselves second in the table, just one point behind league leaders Manchester City, and if they were to slip up at any point, the Reds would no doubt be hot on their tails right behind them waiting to take their place.

In other news, a pundit has sent out a warning to Liverpool regarding the contract negotiations of a 30-year-old star. Read more here.