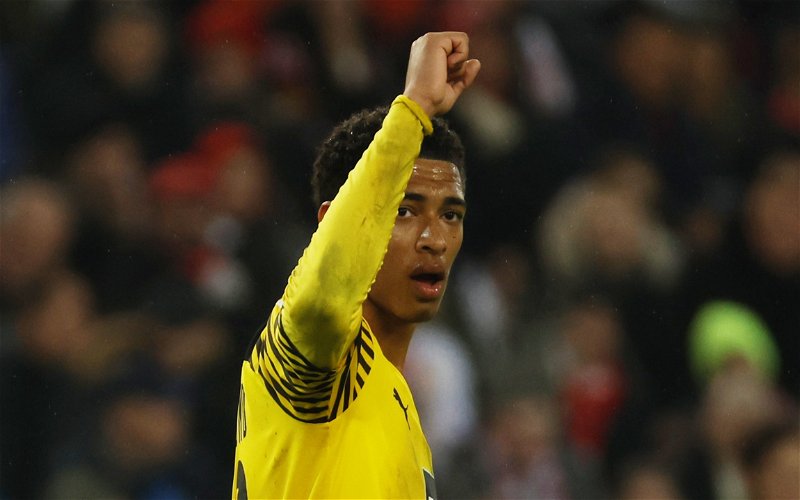 Liverpool are one of several clubs who hold a firm interest in Dortmund’s English midfielder Jude Bellingham.

That’s according to Spanish publication Cadena SER, who claim that Liverpool are ready to pay the asking price for the teenager.

Real Madrid are the club also linked, and the two European heavyweights look set to battle it out for his signature.

Both sides are wary of the astronomical fee touted, as both have recently spent big elsewhere.

A teenager bursting onto the scene at Anfield, scoring, assisting and showing maturity far beyond his years.

Whilst this may have been Steven Gerrard not too long ago, the signing of Jude Bellingham could help fans relive the joy of watching a young starlet grow to dominate English football.

The Birmingham-born midfielder boasts 11 goal contributions this season at the tender age of just 18, earning himself numerous England caps along the way.

Not only this, but his average SofaScore rating of 6.96 is incredibly impressive, outlining consistency seldom seen in a player so young.

Meanwhile, his stats on FBref make for a sea of green, suggesting that there are few areas that Bellingham falters in. It is naturally his offensive statistics that have drawn comparisons with Liverpool legend Gerrard.

The £72m-rated maestro ranks in the 96th percentile for non-penalty expected goals and assists, and in the 97th percentile for both dribbles completed and touches in the attacking penalty area per 90.

The hard-working playmaker loves to push forward and progress his side offensively, despite often playing from central midfield.

His ability far precedes his age, and he has drawn praise from England teammate Jack Grealish.

He noted: “’I haven’t actually (played with a teenager who is that good). It is scary how good he is at 18.”

He continued: “He is just so mature. He is built like he is my age at 26. He has so much technical ability and he is mature for his age”.

Although the price tag that inevitably will come alongside Bellingham will be astronomical, if Jurgen Klopp can tempt him to make the same switch he made, he will have a man who can prop up Liverpool’s midfield for the next decade, just as Steven Gerrard once did.

In other news, Liverpool now closing in on perfect TAA competition, he has a “massive future”.