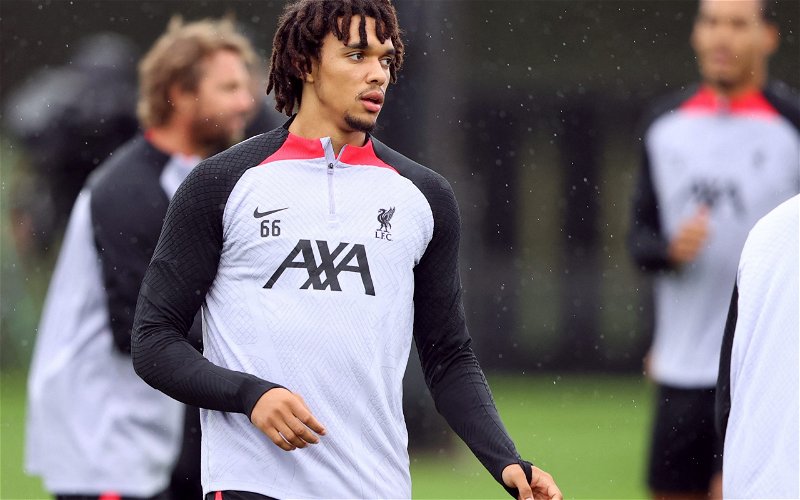 Former Liverpool right-back Glen Johnson has backed Trent Alexander-Arnold to shine once more, amidst criticism in recent weeks over the 23-year-old’s defensive capabilities.

The Liverpool Echo relayed an exchange from PA News Agency which documented Johnson speaking at an LFC Foundation-SC Goals for Change partnership event at Anfield.

Asked about Alexander-Arnold, the former Liverpool full-back said: “I personally think people should back off.

“He set the bar so high in recent years that people are just too quick to jump on his back just because he is not at the level we are used to seeing him.

“We all know he is better going forward than defending but there is nothing wrong with that; every player is better at one thing than something else. I think it is a bit harsh. Of course he hasn’t been playing to the level we are used to seeing but you don’t lose your ability overnight. He is still world-class.

“Every player goes up and down in form and Trent no more than anyone else wants to get back to his heights. He is still a young lad and once he gets going and gets a bit more confident I am sure he will reach the heights he has been at in the past.”

Everything that Johnson said is pretty much correct.

The 23-year-old has received a lot of backlash for both his and Liverpool’s defensive woes this season, but for the most part, it is undeserved.

Alexander-Arnold is crucial to Liverpool’s attacking threat, having delivered the most crosses of any player in the Premier League for the last three seasons in a row.

With Jurgen Klopp instructing both of his team’s full-backs to get forward, despite Andrew Robertson’s best efforts to hold back when the Englishman advances, the positional rotation between the two can often seem too complicated for its own good.

With Alexander-Arnold established as the most creative asset in the Red’s starting XI, he would benefit from a native asymmetrical full-back system, in which one full-back consistently stays deep to create a makeshift back-three in the possession phase.

Manchester City utilise this model when Kyle Walker plays, and it means that Joao Cancelo is granted freedom to attack with the defence still numerically prepared to deal with the opposition counter.

In short, Trent is an entirely adequate defender, with his average of 10.42 ball recoveries per game an elite metric among positionally similar players, as per FBref. However, he offers a much better attacking threat, which is hindered slightly by Robertson’s equal intent to get forward.

It’s an interesting topic of conversation, and one which can also be resolved by instructing Fabinho to sit between the two centre-backs when Liverpool have the ball, giving the full-backs free reign to advance.

Either way, putting all of the defensive blame on the 23-year-old and still expecting Liverpool to attack as they do seems wrong, and if anything it appears to be a positional issue in Klopp’s setup which invites criticism of Alexander-Arnold’s defending.