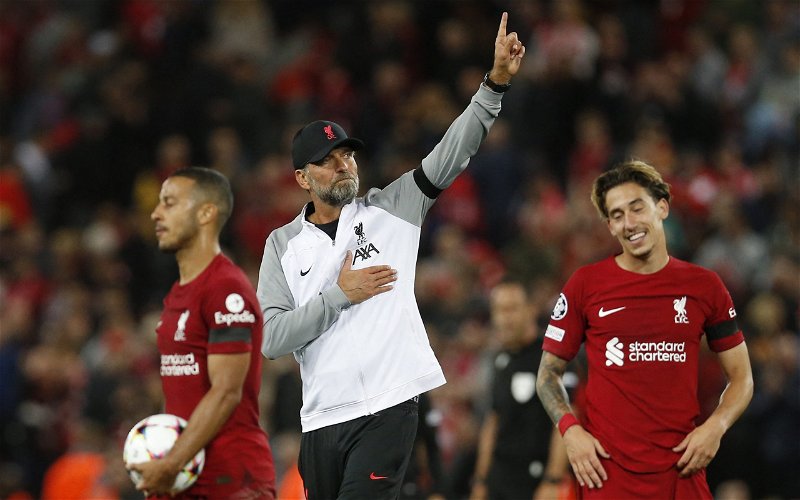 Tuesday night saw Liverpool grab a deserved and much-needed win against Ajax in their second game of the Champions League group stage.

Coming into the clash against a side who had not lost in seven matches and had not conceded a goal in their last five games was always going to be a tough ask, especially for a stuttering Liverpool side low on confidence, which is why the 2-1 win against the Eredivisie champions feels like more than just a group stage victory.

It’s a win which may have just reset Liverpool’s season, and one which got some players firing once more, with the likes of Mohamed Salah ending his mini goal-drought and Diogo Jota embedding himself straight back into the side on his first start of the campaign as if he’d never been injured.

Amid positive performances from a number of players, it was the likes of Joel Matip, Kostas Tsimikas and Thiago Alcantara who shone brightest for the Reds in their time of need, according to The Athletic’s James Pearce.

Taking to his discussion column after the Champions League affair, Pearce stated: “Matip the hero as his late header secures a dramatic Champions League victory at Anfield. Just the boost Liverpool’s season desperately needed going into the international break. They dug deep after Kudus had cancelled out Salah’s opener. Matip, Tsimikas and Thiago the pick for me. The changes certainly paid off tonight.”

Sharing his discussion page on Twitter, the journalist accompanied the link with the caption: “Much more like it…. Matip, Tsimikas and Thiago the pick for me. #LFC”

You can understand why Pearce singled out the aforementioned trio when looking at the statistics from last night.

In Matip, you have the winning goalscorer and the player who won the most duels in the match (13)

In Tsimikas, you have the player who created the most chances in the game (five), and got the assist for the winning goal.

In Thiago, you have the string-puller, who controlled the tempo and completed the most passes (55) in the match.

All three were integral to the win on a night when Liverpool badly needed their players to step up.

Tuesday’s 2-1 win against Ajax may just give the Reds the required momentum to drive on in the Premier League once more, even though they don’t play again until 1 October, and they will be looking to do so with the same gusto which was on display last night.