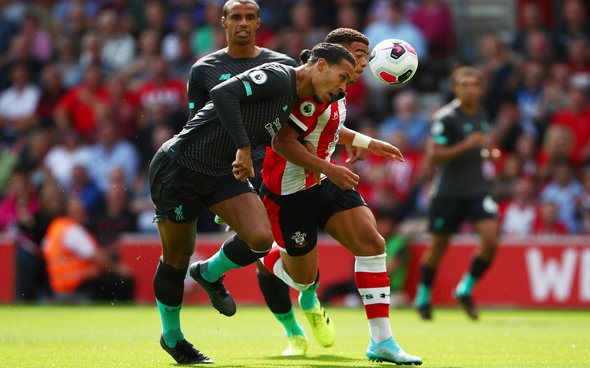 Chris Kamara singled out Liverpool defender Virgil Van Dijk for a mistake he made during the 2-1 defeat to Southampton.

The Sky Sports presenter shared that he was surprised how ragged Liverpool’s defence looked during their win against the Saints, and suggested that Van Dijk nearly made a costly mistake before the final whistle by ball watching.

Kamara stated that Van Dijk let Danny Ings get the better of him and claimed the Southampton forward should have made the most of that opportunity by scoring.

“I was so surprised when I saw this, how ragged Liverpool’s defence were,” said Kamara on Goals on Sunday (Sky Sports Premier League, Sunday August 18th, 12:03).

“Y’know the best defender in the world, we all know is Virgil van Dijk, can he get caught ball-watching? Yes he can.

“Look at him now, he’s got Danny in front of him, he sees him, when the ball is on the right-hand side, Virgil has just let him run in behind and Danny should scored this.”

Jonathan Walters acknowledged that Van Dijk made a mistake by ball watching instead of keeping an eye on Ings, but went to downplay the error by saying it can happen, but Kamara suggested the centre-back shouldn’t make those sort of mistakes given the standard he has set himself.

“I look at him now as a god, you can’t make those mistakes,” replied Kamara.

There’s no denying that Van Dijk was lucky that Ings didn’t manage to score when gifted an opportunity to score an equalizer for the Saints in the last minutes of the match, as dropping points against Southampton wouldn’t have gone down well. This is because Liverpool learnt the hard way how precious every point is last season as they missed out on winning the Premier League title due to a single point. However, Van Dijk switching off wasn’t punished on this occasion, and he no doubt realises how lucky he is. Yet even with that said, Kamara was a bit harsh to single out the 28-year-old centre-back as he did admit the Reds’ defence was disappointing across the board on Saturday. While the presenter openly admits that he holds Van Dijk to a higher standard, it still seems a little unfair to mention him and not call out any of his teammates for their mistakes. Van Dijk defied expectations last season by consistently wowing for the Reds, he averaged a rating of 7.88 across his 38 league appearances (Source: WhoScored), and hopefully, he can continue to be a reliable presence at the back this season.