Jurgen Klopp should ring the changes to his starting line-up ahead of Liverpool’s UEFA Super Cup clash against Chelsea at Besiktas’ Vodafone Park on Wednesday night.

Liverpool play against Southampton on Saturday in the Premier League and while the league is a priority for the Merseyside club, it would also be daft to name a completely changed side and potentially miss out on a second trophy of the season already.

That is why Klopp should only make a few changes to his side.

Alisson Becker picked up an injury in the 4-1 win against Norwich on Friday so must be replaced by summer signing Adrian in goals.

Fabinho, Georginio Wijnaldum and Roberto Firmino should be rested for the trip to Istanbul with Alex Oxlade-Chamberlain, Naby Keita and Sadio Mane all returning to the starting line-up. 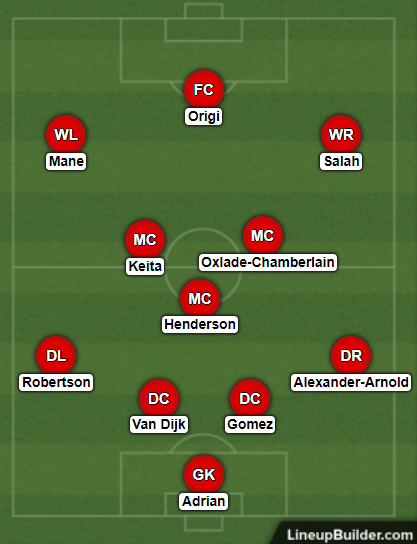 Klopp should leave his defence of Trent Alexander-Arnold, Joe Gomez, Virgil van Dijk and Andrew Robertson unchanged as stopping Chelsea from getting on the scoresheet and getting some early consistency to his backline could of massive benefit.

Jordan Henderson, Oxlade-Chamberlain and Keita should be Klopp’s three midfielders so that £75,000-a-week [Spotrac] Wijnaldum and Fabinho can rest up ahead of the clash with Southampton.

Up front, it would be a good game for Klopp to hand Firmino a rest while also handing Mane his first start of the season to try and get him back up to speed after a long summer involving the Africa Cup of Nations.

Mane, Divock Origi and Mohamed Salah will no doubt cause plenty of issues for a Chelsea defence that leaked four goals against Manchester United on Sunday and help Liverpool to their fourth Super Cup victory.