Deco has delivered a two-word message to Fabinho after Liverpool’s 4-1 opening day victory against Norwich City in the Premier League.

The Brazilian international played the entire 90 minutes in the heart of midfield and picked up where he left off with a solid performance – making seven tackles and two interceptions [WhoScored].

Former Barcelona and Chelsea playmaker Deco recognised the effect Fabinho had on the game, and posted a message on the Brazilian’s post on his official Instagram account, simply saying “Great start.” 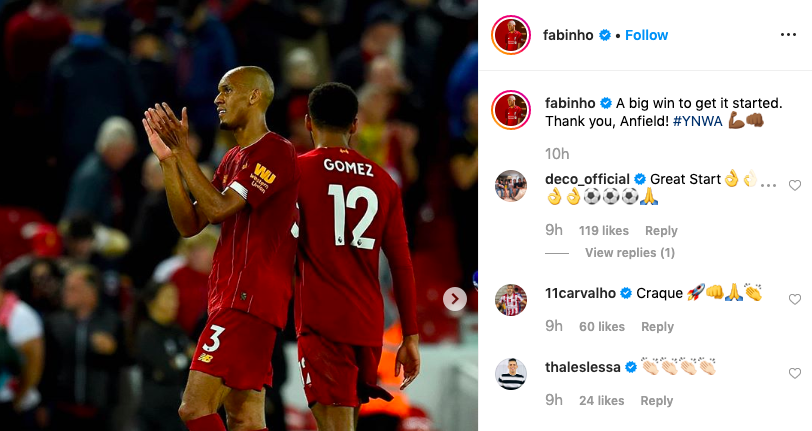 After a slow start to life at Anfield, the Reds’ enforcer came to life midway through the season and played an integral role in Liverpool’s run to their sixth Champions League success.

The scoreline didn’t paint the entire picture last night, and defensively Jurgen Klopp may have asked a few questions of his backline. Norwich didn’t paint themselves in glory at the back either but caused the Reds problems when Emi Buendia got on the ball and looked to send Teemu Pukki through on goal. Fabinho had to remain solid during those times and did just that, with the Brazilian’s seven tackles mainly coming from Norwich counter attacks. The Brazilian adds to solidity to Liverpool’s midfield, with Jordan Henderson in there for his passing abilities alongside the box-to-box mentality of Georginio Wijnaldum. It is vital that the Brazilian stands firm when opposition attacks break forward as Henderson and Wijnaldum can be found guilty of pushing forward too much at times and have to rely on Fabinho to bail them out of trouble. To get the recognition of Deco, it only proves that Fabinho is doing all the right things in the heart of midfield, with Liverpool surely grateful to have such a level header character in the heart of their side.