Liverpool manager Jurgen Klopp would be wise to make three changes to his team for Wednesday night’s massive Merseyside derby clash with Everton.

One of those changes will be enforced, of course, after first choice goalkeeper Alisson was senselessly sent off in the 2-1 victory over Brighton & Hove Albion on Saturday.

That means that back-up shot-stopper Adrian will almost certainly replace the Brazilian between the sticks, while Joe Gomez and James Milner must also come into the team.

Dejan Lovren and Andrew Robertson should drop out for Wednesday’s game, with those three changes likely being enough for the Reds to destroy their cross-city rivals.

As mentioned, it looks set to be Adrian in goal against the Toffees. The Spaniard filled in superbly earlier on this campaign, and Klopp will have no qualms throwing him in again on Wednesday.

Trent Alexander-Arnold is the number one choice at right back, and with good reason. Meanwhile, Milner should fill in for Robertson at left back. The Scotland international is clearly struggling with some injury issues, and so the veteran must replace him here.

These mid-week games are ideal opportunities for Klopp to give Gomez the game time he craves. The youngster should come in for Lovren and start alongside Virgil van Dijk at the heart of the defence.

Central midfield will likely be the same as it was on Saturday. Jordan Henderson, Georgina Wijnaldum and Alex Oxlade-Chamberlain can all expect to keep their place here.

The same goes for the front three. Mohamed Salah, Roberto Firmino and Sadio Mane must all start once again on Wednesday night. 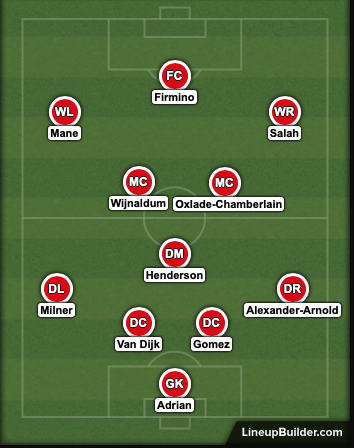