The Reds welcome their cross-city rivals to Anfield on the back of Saturday’s 2-1 victory over Brighton & Hove Albion, a game which saw first choice goalkeeper Alisson sent off.

That means that Adrian will almost certainly take up residence between the sticks against the Toffees, while veteran midfielder James Milner is likely to replace Alex Oxlade-Chamberlain as well.

Those will most probably be the only two changes the German makes to his starting line-up for what is sure to be a heated encounter on Merseyside.

As mentioned, Alisson is out of this game after his senseless straight red against the Seagulls. It was a moment of madness from the Brazil international, but in Adrian they have a fine replacement. He will surely start on Wednesday.

The full backs, as ever, pick themselves. Trent Alexander-Arnold will likely keep his place at right back, while Andrew Robertson can expect to do the same on the opposite side of the defence.

At centre back, Dejan Lovren has done really well in recent weeks and deserves to keep his starting spot once again. He will surely start alongside Virgil van Dijk at the back, here.

Klopp tends to go with experience in central midfield, and he will likely do so here as well. With that said, Milner can expect to come in for ‘The Ox’ and join Jordan Henderson and Georginio Wijnaldum in the middle of the park.

Meanwhile, it’s business as usual at the sharp end of the pitch for the Reds boss. Mohamed Salah, Roberto Firmino and Sadio Mane will surely all play from the start at Anfield. 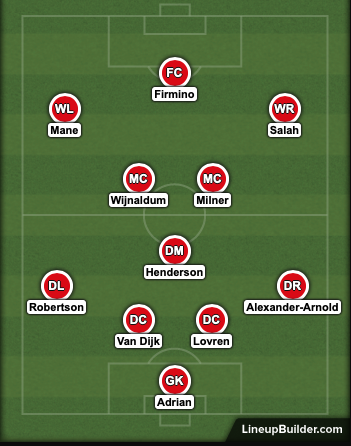